The Corsairs of Umbar were one of the chief antagonists during the Dream-chaser cycle. But while some remained treacherous to the bitter end, others turned to the good side and joined the players. This launched the Corsair archetype, which to this day remains pretty undeveloped, with only 1 hero in the card pool at the moment. But it is always fun to speculate about how the archetype could work.

Who are the Corsairs?

The Corsairs hail from Umbar, the chief port on the bottom of every map of Middle Earth. While the city and its people are from Numenorian descendants, their blood has become mingled with that of the Haradrim and various other folks. As such, the people who live there can no longer be counted as real Black Numenorians. The Corsairs have held a grudge against the Faithful who reside in Gondor and have troubled them by raiding the long coastline of Gondor.

Since the Corsairs were introduced during the Grey Havens deluxe expansion, I would suggest players try the following expansion packs in order to get a taste of what Corsair synergy could look like. 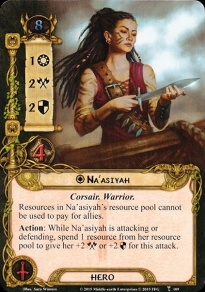 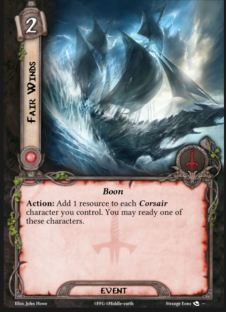 The one card that we currently have doesn’t really synergize with any other cards so I will have to think up my own synergy for the Corsair trait. I would like to see something that plays just like the Corsair enemies that we got during the Dream-chaser cycle. These enemies relied on getting buffs and abilities by getting resources on them. I think it wouldn’t be hard to get this to work in the player card format. Perhaps having a card like Captain on Deck could add resources to Corsair allies. Or some heroes could spend leftover resources from their resource pool to add those resources to allies. 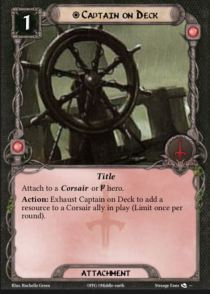 These allies could do various things with their resources. I could easily see some getting boosts to their attack and defence for every resource on them. To counter this effect from becoming too powerful (the next Gondorian Fire/ Blood of Numenor) players would have to discard some amount of resources to make sure that these allies don’t become overpowered.

The Corsairs don’t really cooperate with any other trait at the moment. Na’asiyah is pretty anti-social as she can’t spend her resources to pay for ally cards. She only can spend resources to pay for loot (attachments), missions (side-quests), and events. This doesn’t rule out the fact that some future synergy might open up to different traits, but I think that this anti-social behaviour should stay with the trait. It describes the relationship between a turncoat Corsair and the Elves/Dwarves/Men perfectly. 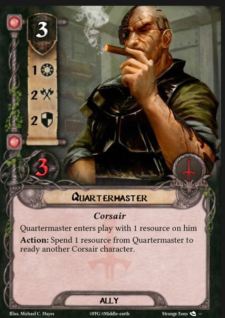 Since the trait is pretty undeveloped, there aren’t really any staples or bad cards to pick. I do like the Na’asiyah hero as she can get pretty strong if you build for her. While she isn’t the most consistent hero on the block, she can do one über-defence or attack in a pinch if she has collected a bunch of resources during the game. For the new Corsair synergy, she might be able to shift over some of those resources to bolster the strength of her crew with Captain on Deck or with any other effects that I could design. Apart from that, Na’asiyah can be a powerful asset to a deck that needs a Tactics hero to supply additional offensive/defensive capabilities, but that deck shouldn’t rely on the allies from that sphere by adding Na’asiyah. 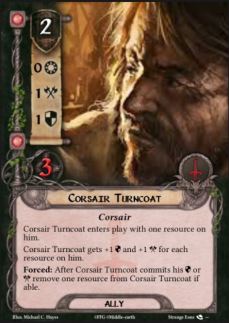 To build for her ability to be more useful, I would suggest throwing Steward of Gondor on her. Not only does this grant her more resources, it also gives her the Gondor trait, which makes her a good target for extra resources with Wealth of Gondor or Leadership Denethor. This can cause you to get even more use out of her ability. Another good thing to give her is an option to ready her. Unexpected Courage is the easy pick here, but there are some other options you could explore as well. Rohan Warhorse is in sphere and could allow her to attack twice.

Like I mentioned before, the players do not have enough Corsair cards yet to pick a bad card. I personally like Na’asiyah, so I put her in the staple category instead of here.

Since the Corsair archetype is yet undeveloped, I can only recommend you decks that run Na’asiyah. Try some of these out to get a glimpse at what the Corsair trait could do in the future.

So ends yet another trait analysis. While I have been doing quite a lot of these smaller traits lately, I think I will do a larger one like Gondor/Outlands in the near future when I have time. I really like to fantasize about what yet undeveloped traits can become. Since the next cycle is Wilderlands, we might see some sort of sailing down the Celduin or the Inland Sea of Rhun. Perhaps more Corsairs will join us there.