If you’re relatively new to the game and picked up the most recent expansion like most of us start out doing, chances are you weren’t prepared. I was not prepared at all, to say it mildly. I first started with The Lost Realm, a few years back, and I’m only 16 just now. I barely knew the rules and had no strategy going in. Since I struggled quite a bit, I decided to talk about how to help people with a limited card pool just starting. If you just started, you probably picked up the Sands of Harad and its cycle to try and stay up to date. When I was hooked, I got the most recent one and got the new ones when they came out, while slowly heading back into the Ringmaker cycle when there was a hiatus. But the newer quests expect you to have an expanded card pool and are no easy walk through Mirkwood. Luckily the deluxe expansion brings you two new versions of Gimli and Legolas, which is great unless you are playing with multiple people and are arguing over which Legolas to use. They have powerful readying effects, and since they focus on readying it makes sense to include cards that buff your heroes. The deluxe expansion comes with two cards clearly made for them, Dwarven Shield and Mirkwood Long-Knife.

The entire cycle, in general, focuses on expanding Thematic decks, with more Ents, Rohan characters, and of course the new Harad characters. If you are just beginning, however, the best bet is to start with the Harad 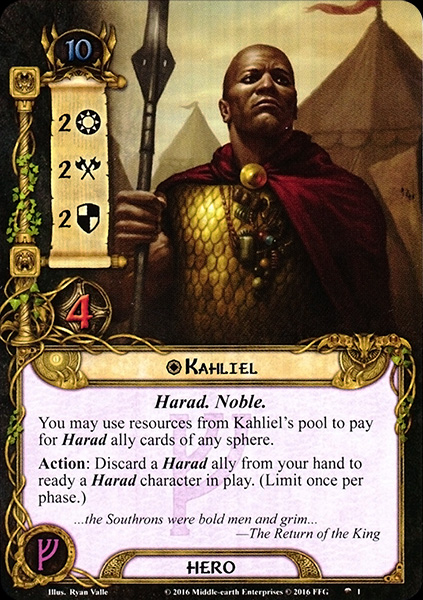 theme and their cards, while using Kahliel from The Mumakil. If you are doing this, you should centre it around Harad allies and make sure you keep Kahliel alive. I would include all three different unique Harad characters from each sphere, and some cards such as Steward of Gondor or any type of resource acceleration if you have access to it. If you don’t have enough resources, you can always discard that ally to ready a Harad character, so either way, it will help you out. You also could use Kahliel’s Tribesman or Southron Refugee to help reduce costs and get the Harad bonuses. Another important card is Kahliel’s Headdress, which you want to use whenever you can, even though the shuffling gets annoying. But with the Harad aspect covered, the other two heroes could be anybody. Many of the cards from the expansions are uniquely different, but the Core Set has a few options. If you decide to buff up powerful allies and heroes, you could use Lore Glorfindel to help heal them, or Leadership Theodred to get more resources for Kahliel.

To try out the Harad strategy I decided to do the first quest in the Harad Cycle with Kahliel, Glorfindel and Theodred. Honestly, it didn’t go well for me, but I was on the right track. Steward of Orthanc is great at questing since he is neutral, has two willpower, and has an ability that lets you draw cards all in one, and he got me through most of the quest, and I was lucky enough to draw three copies of him. Forgetting to trigger his ability was a mistake I made that could’ve helped me. I let several allies get wounded while saving Glorfindel’s ability for heroes, which also wasn’t good when I got swarmed with archery damage. Yazan helped me take out a few enemies, and I played him on round two with the help of Theodred, Steward of Gondor, and Southron Refugee. I played Gandalf as a last-ditch effort, which defeated one enemy but unfortunately, another one was revealed during the next phase.

My failure aside, the Harad Cycle has great Player cards that can expand upon old strategies with cards like Quickbeam for Ent decks, and plenty of cards to expand upon old traits. The best pack in my opinion for Player Cards only is The Mumakil, since it includes Wait no Longer, and Andrath Guardsman, and all the unique allies alongside Kahliel as a Hero. This is definitely an essential for Harad decks, or combat focused decks. The Spirit cards aren’t noteworthy, but if you ever wanted a pipe for Dwarves then this has you covered.

The Race Across Harad pack expands upon Dunedain and the side-quest mechanic by introducing Thurindir. His ability is great for a handful of quests by letting you start with a side quest in your hand. Unfortunately, most of the Harad quests focus on time, so side-quests aren’t recommended for most of them. For the next cycle and a couple of older quests, side-quests are a great tool to bring. The pack also includes one of my favourite cards, Steward of Orthanc. He is a tiny bit expensive, but since he is neutral it doesn’t bother me, and his two willpower makes you want to quest him each turn, while his optional ability to raise your threat to draw a card is great most of the time.

The next pack, Beneath The Sands, introduces arguably the best mono-tactics hero (besides Tactics Eowyn), Hirgon. Unless you are forgetful like me and forget to trigger his ability. This pack doesn’t include many noteworthy cards but has a powerful side-quest in Keep Watch, which is great for using important defenders instead of sacrifices, by making them more likely to survive. The Red Arrow is also a nice addition to any mono-tactics deck that is looking to get in Valour.

Each pack so far includes at least one card that grants a character a trait, and one card that supports the Harad trait even more, and of course plenty of pipes, with The Black Serpent being no exception. Again, nothing too interesting until you look at the Hero, Fastred. His ability lets you return an enemy to the staging area after defending with him to reduce your threat by two, with I’ve never used him as a centrepiece in a deck, but I’d imagine he’d be good at low threat decks or secrecy decks.

Another unique hero that I’ve actually tried using is Folco Boffin from The Dungeons of Cirith Gurat. You can sacrifice him to reduce your threat by seven, with his starting threat being seven and minus one for each Hobbit hero you control. I don’t know thematically how this works in the lore of the game, a Hobbit hero intentionally being killed, but it is kind of funny if you have dark humour like me (I always imagine him running into battle and falling to the first arrow in a few seconds). But anyway, the pack contains some useful cards and one that raises your threat but is really useful in Heirs of Earendil. It is great location removal but requires you to have a Dunedain and Noldor Hero or unique ally. There is also another side-quest themed card in Legacy Blade, which gives the hero plus one attack for each side-quest in the victory display, and of course the trait giving card that turns somebody into a noble, and some characters from several factions such as an Ent, a Rohan character, a Noldor character, and a Dale character. Like I said, these packs expand upon existing themes. The Dale character actually gets more useful with the current cycle, where he makes a return in many Dale decks.

The final pack, the Crossing of Poros, introduces Quickbeam as a Hero (with or without his unique symbol). But traits aside, this pack finally introduces some things that aren’t so trait focused, with the first Player Encounter card in a while, Flight to the Sea. It also includes a trap, a trap based ally, a Beorning, and one of the most versatile cards, Magic Ring. This card is great if you don’t mind raising your threat, and allows the hero it’s attached too to do basically one of the three main things that heroes do, gather a resource, ready him, or heal him. The Trap cards in this deck make Crossing of Poros a must buy for any Trap deck, and Followed is even useful as pseudo-questing for Tactics.

This cycle and deluxe expansion are mostly trait-based, with cards that grant traits, benefit from traits, and expand upon obscure traits. The cards seem more of an add-on to previous decks, but if you started with it, Kahliel and your Harad army is the best bet. Some of the later packs also tend to prepare the players for the new cycle, with Beorning and Dale support. I would’ve gone into more depth on the cards, but for an entire cycle in one article it might take a while, so I tried to summarize it the best I could. The deck I made and used is here on RingsDB. The deck actually runs well with all the Harad cards from these expansions, plus some other cards from the cycle and one core set. This was my first article, so I hope you liked it from my newbie perspective, and thanks for reading.

One thought on “A Beginners Guide to The Haradrim Cycle”