It has been a while, but being locked down by the corona virus I’m returning to the Deckbuilding series. With a lot new powerful player cards, especially the contracts, there are a lot more possibilities to build interesting decks designed to beat specific scenarios!

I am returning to this series with the Lost Realm and Angmar Awakened cycle. This was for a long time considered the hardest cycle in the game and it will be interesting to see how difficult it becomes with a modern card pool and compares to newer quests. I enjoyed the cycle always a lot, being in general a fan of more difficult quests.

The first quest of this cycle, Intruders in Chetwood is again sort of an introductory scenario to the new mechanic (side-quests) of the cycle, similar to the Fords of Isen (Card draw hate) or Voyage across Belegaer (sailing). However this one is a lot harder, starting the game with a big Orc War Party in the staging area, a nasty 4 threat/ 6 Attack enemy with a bunch of health, that has to be killed to win the game. It is also not a unique enemy, as there are multiple copies in the deck that must be defeated if they are revealed during the game.

When building a deck for this quest, this enemy is my first concern. It can’t take damage in the staging and questing over its three threat for multiple rounds and eating the threat raise from the quest effect at the end of each round isn’t the best option either. So we probably want to fight it rather early on.

My first decklist to tackle this was a Dunedain deck with Spirit Dain, who can defend for 6 on turn 1. I planned to simply engage the Orc War Party turn one and keep it around until I had enough attack power. There was however not enough willpower to complete side-quests and make 30 progress on the main quest in time, I eventually ended up with too many engaged enemies.

I then realized that The Great Hunt could be used to simply dicard Orc War Parties in the staging area. I build a mono-Lore deck with Aragorn, Grima and Mirlonde, that planned on not engaging most enemies, use Aragorn to keep it’s threat low and Great Hunt the Orc War Parties away. The main issue for this deck was Outlying Homestead. If this location is in the staging area, you can’t lower your threat, so it shuts down Aragorn. However, when I decided to travel there, with the extra encounter you reveal as a travel cost, it’s 8 quest points and enemies left in the staging area I ended up location locked.

I managed to win a game with this deck where Outlying Homestead showed up late, but overall I wasn’t too happy.

Having lost a couple of games I decided it’s time to take a more straightforward approach. If I can’t lower my threat and can’t tank the enemies forever, I simply have to defeat the quest faster, killing the War Party early on and then quest to victory.

Good questing and high attack power – you might guess that I’m using Tactics Eowyn. Her ability gives 10 attack, which can murder a War Party all by herself. Of course we also neeed to defend it, so we end up once again with Spirit Dain, who can block a 6 attack enmy on turn 1. Our last hero should give us some attack for later in the game. Because Eowyn and Dain don’t require any cards to work and Tactics/Spirit are the natural spheres of the Rohan trait, I decided to go for a Rohan-theme with Spirit Theoden. Here is my first draft: 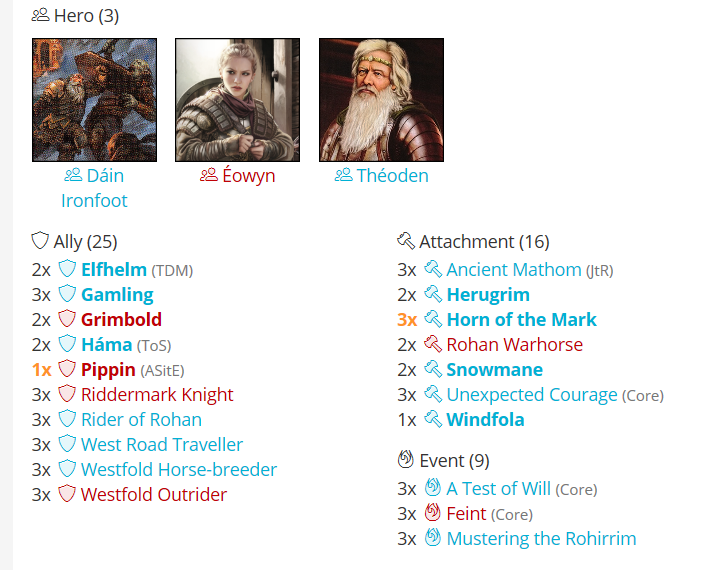 With Dain and some Unexpected Courages covering defense, the allies of this deck are here to quest and attack. Rider of Rohan are especially great, helping with both of those once we cleared an Encounter side quest. Elfhelm doesn’t seem to bad to counter the threat raise from the quest Card effect (even tough Outlying Homestead will shut him down). Horn of the Mark, Westfold Horse-Breeder and Mustering the Rohirrim give us some trait specific card draw, which is otherwise hard to find in those spheres.

My first playthrough was really strange, because I only revealed a sidequest for the first two turns (but fortunately not Lost in the Wilderness).With the Orc War Being taken out by Eowyn and having travelled to the initial location had I had to quest against 0 threat on round 2+3.

Then a Weight of Responsibility revealed two enemies, and because I could only engage one and from then on kept revealing enemies, an Angmar Marauder  had to sit in the staging area for several turns. Here came to of my allies in handy: Elfhelm countered his threat raise several turns, and then I drew into Westfold Outrider, who allowed to me to engage an extra enemy. Being delayed by those sidequests, at the end my threat was in the mid 40s, but I managed to win the game.

In my second game, I got out an Westfold Outrider turn one. Seeing the potential of killing two enemies with Eowyn, I decided to only quest with Theoden. I reveal Sudden Assault and because I underquest I have to find an additional War party. So I engage one optionally and block it with Dain, use the Outrider to drag the other one out after the enemy attacks step and kill both with Eowyn. Having again an empty staging area and this time no sidequests to deal with I could simply quest to victory from there on.

Game number three was unspectacular compared to the first ones, I again had a good start and was able to take down a second War party in the late game with a powered up Theoden and some Rohan allies.

With my three victories I don’t really need to adjust the deck, but I want to point out that I didn’t really make use out of Gamling and the whole discarding engine. I would cut two, maybe even all three copies of him and swap in maybe Eomund or some generic Rohan allies. I left out a lot of the Rohan discard allies like Escort from Edoras or Westfold Horse-Breaker, so this might have made Gamling even less appealing. But the whole discard engine seems still just much less efficient than cards like Rider of Rohan and Westroad Traveler, even with the support of new cards like Horn of the Mark and Muster of Rohan.

I will name the final deck Rohan War Party and it can be found on RingsDB.

My feelings on this quest have always been a bit mixed, and it isn’t different after this runthrough. I am a big fan of the whole side-quest mechanic and am glad that it was introduced here. But I think the quest could have explored this mechanic more, with the Orc War Party it is rather combat heavy and forces you to bring a more focused deck.

Comparing it to the similar introduction quests, I think this one is a bit to hard and Voyage Across Belegaer to easy, while Fords of Isen hits a soft spot for me. But at least Intruders in Chetwood prepares your for the challenges to come later in this cycle…

Deckbuilding-wise, the usefulness of the Westfold Outrider surprised me once again. In quests with different engagement rules than normal like this one, such forms of engagement control seem to be strong.

Now I’m looking forward to move on to the Weather Hills. Being stuck at home, dealing with some Weather in form of treachery cards might be refreshing.