If you ever need a song stuck in your head, play a deck with this trait, since “They’re taking the Hobbits to Isengard (gard, g-g-g-gard). The Isengard trait is the first of the so-called grey area traits, between the side of good and evil. Other traits like this are the Harad and the Corsair trait, where both enemies and player cards have a shared trait. While not fully fleshed out, we were all a bit surprised when we received a new Isengard ally in the previous cycle, so let’s delve into what this trait is all about.

The peoples of Isengard are of mixed blood of Numenor, Rohan, 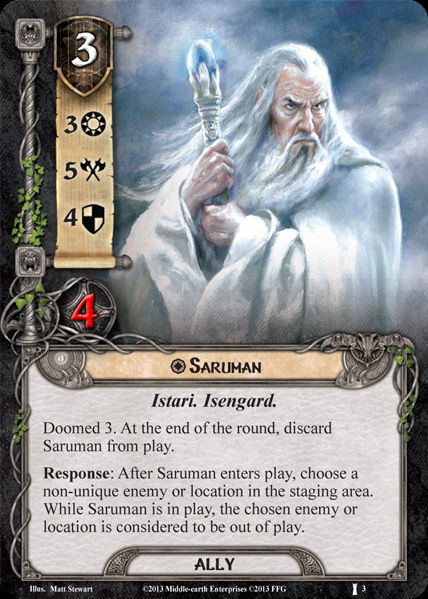 and the neighbouring Dunlendings. Since the tower of Orthanc was build by the Numenorians as a watchtower and relay station for the Palantiri, it needed guarding. The local people took over command under the watchful eye of the King/Steward of Gondor. When eventually Isengard was taken over by the wizard Saruman, the Numenorians backed down and the site became a place of magic and wisdom. At the end of the Third Age, Saruman betrayed the Free Peoples and hunted for the Ring himself, breeding an army of Orcs and waging open War against Rohan. When he was defeated, the Ents of Fangorn took over and were gifted the land by King Elessar. So based on the history of this place, a wide variety of people are involved with the Isengard trait.

The Isengard trait was introduced when the narrative took place around the region. Since then, there have been few cards added to the trait.

Other notable cards include any of the Doomed cards in the various packs. See the upcoming Doomed archetype article for the expansions needed to improve the trait.

With very little cards to choose from, the Isengard trait is only available in the Lore and Leadership sphere, with the majority being in Lore. A lot of the cards are also Neutral, making this archetype fitting for any hero line up. The trait can also fit well with other spheres as long as you are playing Doomed cards. Running Grima as your only Lore hero is fine, as he has built in resource management that allows you to get your Lore cards out more quickly. 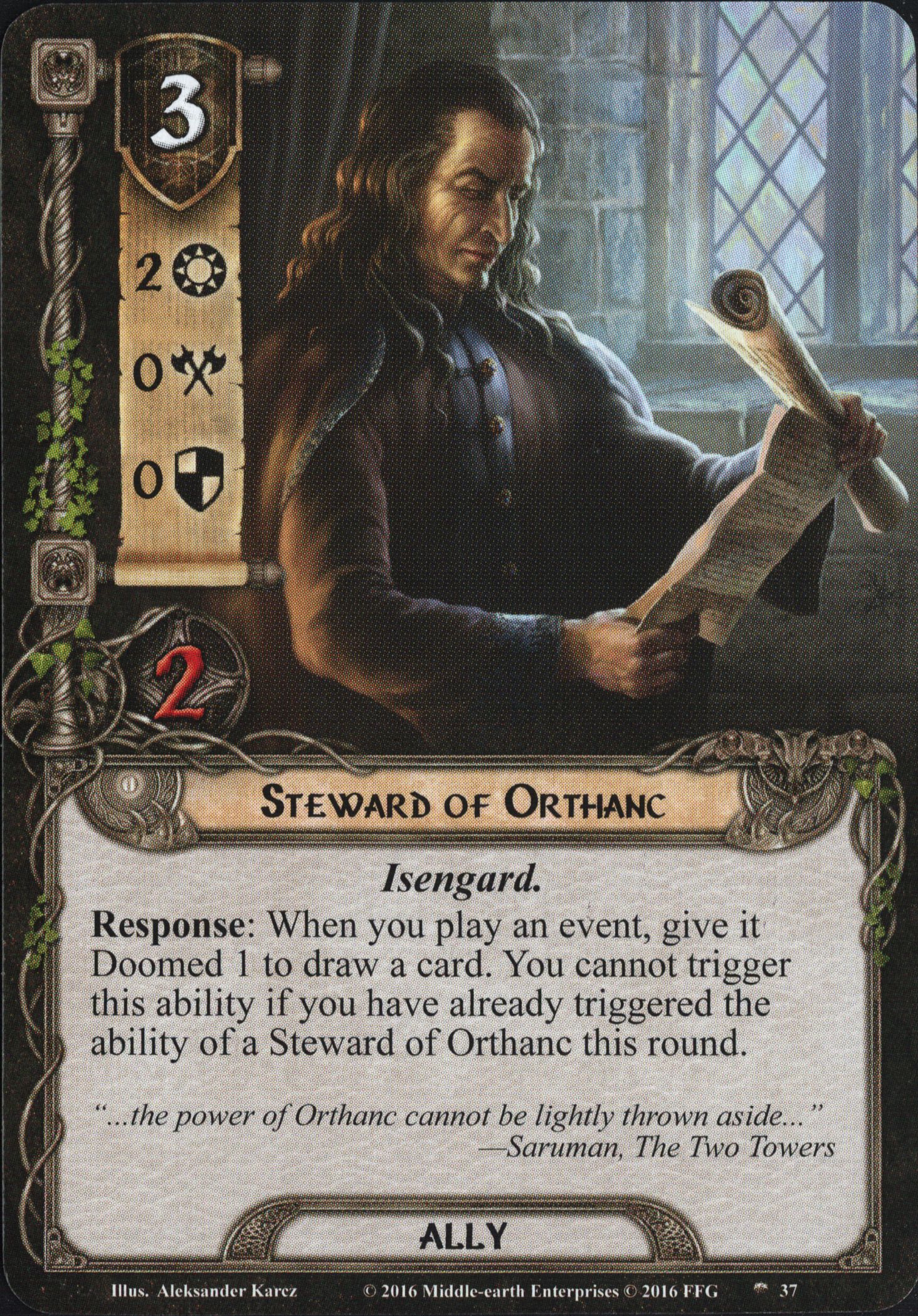 The synergy of Isengard revolves a lot around the same Doomed keyword as the normal Doomed mechanic that will be discussed in a separate article. The idea is to play cards with the Doomed keyword in order to reduce the cost of cards, ready characters, and gain buffs depending on the allies you play. In order to keep your hand filled with cards you can pay easily for with Grima, the new Steward of Orthanc will be very useful in drawing through your deck.

As I mentioned, the Doomed archetype fits very well with the Isengard trait. The two archetypes were introduced in the same box, so there is a lot of overlap between the two. But I will handle the Doomed mechanic in a separate article, as it is also used without any Isengard cards. The Isengard trait will also work well with any cards that allow you to reduce your threat. This is to prevent you from threating out or having to engage a lot of higher engagement cost enemies. Players can also take the other route and try to get above 40 threat as quickly as they can for the Valour mechanic. Isengard can get into Valour a lot faster than other traits, as they have ways to rapidly increase their threat in a short period. The speed at which you reach Valour is also determined by your hero selection, a lineup of Gandalf and Elrond aside Grima will get you there a lot faster than when using Hobbits.

he Isengard trait has one hero, Grima, and he is a rather unique one. Not only is he the only Lore Rohan hero up to this point in the game, but he also has a built-in method of reducing the cost at which you play your cards. To compensate for this reduction of 1 resource, all players will have to raise their threat by 1. In a solo game, this is a very good way to lower the cost of your cards in the early game, accelerating your board state. For multiplayer games, I would advise to first announce to others that you will be bringing Grima, so that they can add some additional threat reduction to their decks. Alternatively, players can run Lore Aragorn for a big jump down in threat at once. Desperate Alliance will allow players to share Aragorn and trigger his ability multiple times.

Keys of Orthanc is also a great card that has to do with the Isengard trait. Every time you raise your threat because of the Doomed keyword (on either encounter or player cards) you may exhaust the Keys to gain a resource. This attachment on Grima makes for some excellent resource acceleration in the early game, allowing you to get more high-cost Lore cards out quicker. While only limited to once per round, the keys can still accelerate your board state if you draw them early.

I will also add Saruman to this part of the list, even though I don’t run him very often. Saruman has some of the highest offensive stats in the game, allowing you so more attack power to throw at your enemies. On top of that, Saruman will allow you to choose any non-unique enemy or location in play and regard that card to be out of play until the end of the round. This allows players to circumvent a nasty enemy or a location that is adding a lot of threat to the staging area. Alternatively, this can also win the game for many players, as they will have removed the final card out of the staging area. This is important during quests like Assault on Osgiliath, Escape from Umbar, and The Hills of Emyn Muil. Saruman’s cost of 3 resources and 3 threat is a bit steep though, making him less of a staple in multiplayer games. Having him leave play at the end of the round doesn’t help either.

Steward of Orthanc is a more recent addition to the card pool but has found its way into a lot of decks. Having 2 willpower is great in Neutral since it allows Tactics decks to run this guy as well and benefit twice from him. Not only his willpower will be a welcome addition, but his card draw too! The Steward of Orthanc allows you to make any event card you play draw you a replacement card by giving that event Doomed 1. This allows mono-tactics to rely less on cards like Foe-Hammer, which take a while to set up. The only thing I find weird about this ally is that it lacks the Steward trait that Denethor seems to have a patent on. 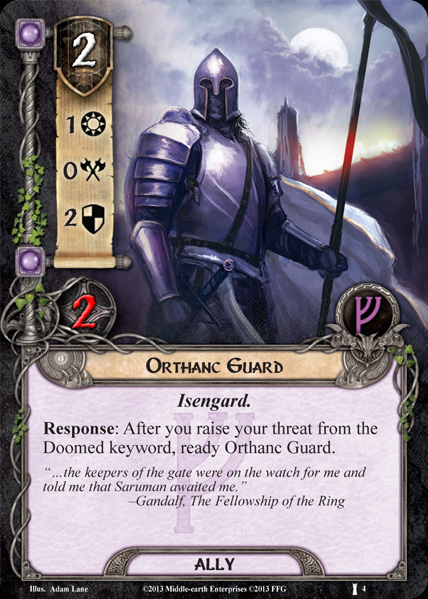 see so little play that I actually had to look them up. Let’s start with the Guard, who is a 2 cost leadership ally, with reasonable defensive stats of 2 defence and 2 hitpoints. Since he is only Isengard traited, he won’t be boosted by a lot of effects throughout the game. His effect allows him to ready after you raise your threat because of the Doomed keyword. This allows you to commit his 1 willpower to the quest, and then ready him to defend in the combat phase. Though his ability is not limited, not a lot of Doomed effects trigger in order to ready him for you. Since he is also not a Sentinel defender, he won’t be doing much for a multiplayer game. Though he is cheap for his stats, I will rather take a Defender of the Naith or Emery over this guy.

The Isengard Messenger has a bit more use to me, but I still don’t run him very often. Having his willpower limited to only +2 because of his effect, he doesn’t make as big of an impact as Quickbeam for instance. While his boost is more reliable than the Guard, since you can use Doomed effects during the planning phase, the fact that it is capped at +2 is just too low for me to run him. Committing him to the quest does have an advantage though, as any encounter card Doomed effects will raise his willpower a little, perhaps giving you that final progress on a location. But I just feel like there are better allies out there with more reliable willpower than the Isengard Messenger.

There are several ways to play with the trait. Some builds are helpful, but others tend to be used as grief decks, trying to out threat other players. Play at your own risk.

Thus concludes this quick overview of the small Isengard trait. Hopefully, we will get more cards with this trait in the future, perhaps even a hero version of Saruman. As the card pool gains more Doomed cards, the cards from this trait get a lot more viable and fun to play with. For you at least, other players might be less excited when you bring these cards to the table…