While scrying the encounter deck can be very useful information for players, scrying your own deck is also helpful. Knowing what cards will be drawn in the next resource phase can allow you to stack the deck in your favour. Searching your entire deck for the crucial 1 off card is also very important to some decks that rely heavily on that card. But having knowledge of what cards are on top, and changing them around also has uses for other things, like the Dwarven Mining archetype. It is also useful to swap top cards of your deck for quest effects like the Undead from the Dream-chaser cycle or treacheries like Scourge of Mordor. Here are some of the staples concerning:

There are actually a lot of cards available that do this in the first 2 cycles of the game. The more recent expansions that include cards like this can be found in The Road Darkens Saga expansion and some other APs on the side. But the early part of the card pool can be enough to help you get some knowledge about your deck. In terms of spheres, the cards are pretty well distributed, though Tactics hasn’t got a lot of ways to find its cards quicker. Neutral also has quite a lot of solid options, ranging from a hero to a side-quest. It should be noted that there are a lot of allies and events that grab specific cards, but they will be excluded from this list, as it usually shuffles your deck and is specific to the type of card you want. For a list of these cards, see this link.

Spirit houses probably the best scrying ally bar none in the game at the moment. On top of that, the sphere also has accompanying allies like Zigil Miner that benefit from knowing what is on top of your deck. By now, you should already know what 2 cost Spirit ally I am talking about, so let’s get to it.

The absolute queen of player deck scrying, this 2 cost Spirit ally is completely devoted to this mechanic. Her stats are basically useless, as you will not be defending with her at any point in time (except when you pop a couple of Lords of the Eldar). Her ability allows you to exhaust the Imladris Stargazer to have any player look at their top 5 cards. They may shift those cards around in any way they like. This allows so many combos, but the oldest trick in the book is to combine her with a Zigil Miner and so create a powerful resource engine. This has been the only real form of resource generation for a while in Spirit until Arwen showed up. 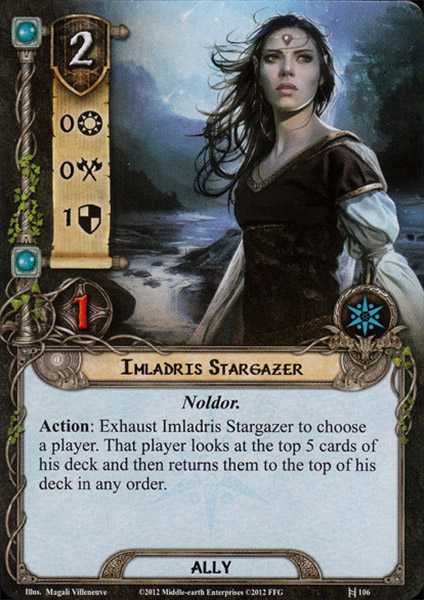 Using the Imladris Stargazer can allow any player to find cards more quickly and make sure that they draw what they want next time they get to draw cards. If the cards of your choice aren’t in the top 5, there are various ways to shuffle your deck, though Master of the Forge/Long Lake Fisherman are probably the best options, as they will likely get you a card as well. The timing of the Stargazer does require some attention though. Her 1 hitpoint makes her vulnerable to direct damage if you exhaust her before staging. The best option is to exhaust her at the end of the combat phase just so you are sure that she lives and that you know what card you will draw for the resource phase.

Other downsides to the Stargazer are that you do not get to draw the card immediately, you will have to use cards like Gleowine for that. Scrying 5 cards deep is often deep enough for balance, but in solo plays, if you are just drawing 1-2 cards per round, she won’t be doing much else. Consider using her on other players as well if you are content with the way you have stacked your own deck.

As tricksy as Lore decks tend to be, they prioritize encounter deck scrying over your own deck. The early life of the game did include Gandalf’s Search, but that event is far too expensive for any Lore deck since they cannot produce a ton of resources. Another card from the early game is really the best that Lore can do, and while it may be expensive, it has other uses besides scrying.

Players were a bit underwhelmed by this 5 cost ally upon release, as there was almost no way that you could save 5 Lore resources for this ally unless you really wanted to. But with the Noldor archetype evolving, Gildor has become more apparent in decks as a proper ally who can take a hit or quest for a lot. His versatility increases because of his action, which allows players to exhaust Gildor to swap 1 card from their hand with one of the top three cards of their deck. They may then return those cards to their deck, in any order. This combo’s well with effects that allow you to draw through your deck rapidly, but also with Imladris Stargazers. Gildor actually lets you draw the card, which is something that the Stargazer lacks. This combination can also be used to bury unwanted cards or to set up discarding effects for maximum potential. If you happen to draw into a Hidden Cache or an Ered Luin Miner, Gildor can return it to your deck, so that you can discard them to gain their benefits. 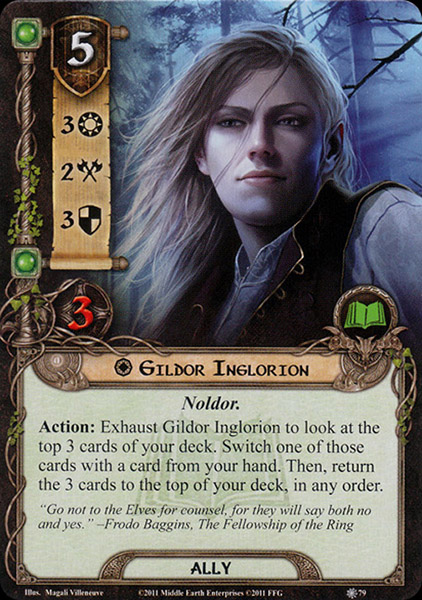 The only issue with Gildor is that you should really want to get multiple uses out of him, paying the 5 resources for just the action is a bit expensive, though To the Sea! To the Sea! can alleviate that problem. His 3 defence and 3 hitpoints can also make him a viable defender, as he is also a good target for A Burning Brand. However, I would, in that case, argue that you should not use his ability until after the combat phase and if he is still ready. His stats are just too good to let go to waste on his ability, so readying effects like Ever Vigilant can be great for Gildor. Lastly, I fear that this version of Gildor will slowly start to fade out, as a new Leadership Hero has been announced. This hero is quite splashable in many decks, blocking players from running the ally as well.

Leadership is usually not known for their influence on your deck, but sometimes a card can flip that all on its head. While the Keen-Eyed Took is technically a player scrying card, he is in no way, shape or form a staple and shouldn’t be on the list. I’d be called a lunatic if I did. Instead, Leadership has another character that allows you to not only scry the top 5 cards of your deck and shuffle them around, it also does a host of other things for you.

I have to say, these female Noldor characters know how to scry your deck. Galadriel is essentially a one-time upgrade of your Imladris Stargazer but is a major improvement. First off, when she enters play, the player may look at their top 5 cards. They may then pick one attachment out of those 5 cards of cost 3 or lower (sorry Sword-Thain) and put it into play. Since the attachment doesn’t have to attach to a character, traps and Guarded attachments are fair game. The player may then reorganize the remaining 4 (or 5 if there was no attachment) into any order they want. 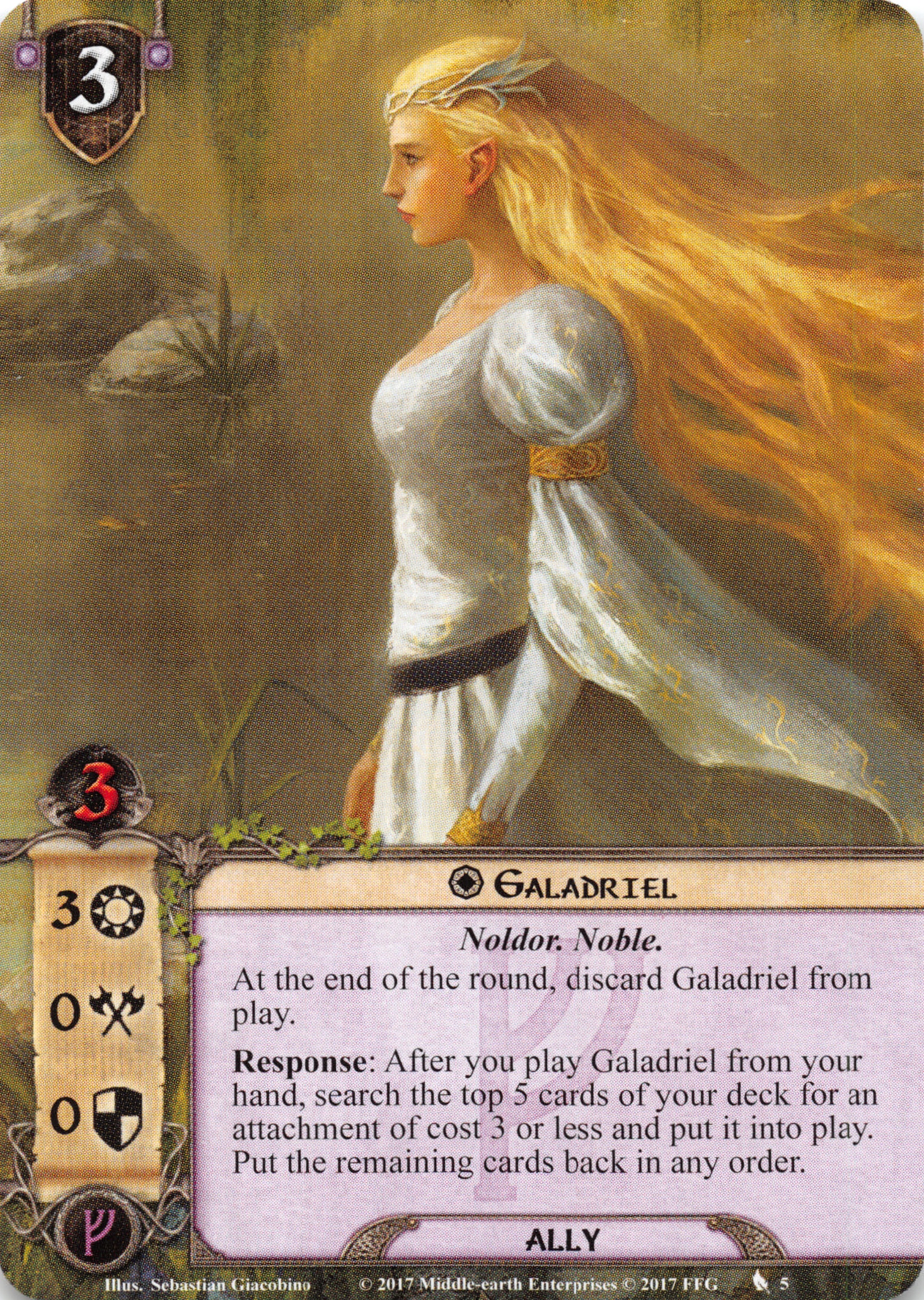 This sets up your deck for several rounds unless you have a crazy draw engine going. But that is not all that Galadriel does, she also is still ready after this ability, allowing you to benefit from 3 points of willpower and the ability to soak some Archery damage as well before Galadriel leaves.

That is really the only downside to Galadriel, she leaves play at the end of the round. While this would make her a great Sneak Attack target, that combo prevents players from using her ability, which only activates when you play her from your hand. The 3 cost in Leadership is generally easy to pay for, but those resources could also be used for other effects. I have seen Leadership Galadriel make a return in recent decks that run the Dale archetype, as those tend to have a lot of resources from Traffic from Dale, and a high density of attachments in their decks. She is great value that allows you to play even off-sphere 3 cost attachments if you manage to find them. A bit of setup with a Stargazer can make this combo even better, as you can be sure you will hit an attachment in your top 5 cards.

The Neutral cards in the card pool are actually great scrying cards. Not only does Neutral have a scrying hero, but also a side quest and an attachment that can allow players to search their deck for important cards as well. Cards like Vilya are also great when used in scrying decks, as you can put the target on top, so you get to decide what comes off of your deck when using the elven ring.

Not to be confused with his two powerful allies, but the hero version of Gandalf is one of the few heroes that actually scry your own deck. When you are playing with Gandalf as your hero, you get to play with the top card of your deck face up. This allows you to see what card you will draw next. You also get to play this card with Gandalf once per phase. This acts as an extension of your hand and can be really valuable against scenarios that limit handsize (In Enemy Territory, Dunland enemies, etc). When you are also running Wizard Pipe, you even get to switch the top card of your deck with a card in your hand. This allows you to reshape your deck as you wish. You can, for example, put a high-cost card on top of your deck, and then discard it with Flame of Arnor for a big boost in attack. The obvious combo with Elrond and Vilya is also super powerful, though you will pay for with a high starting threat. 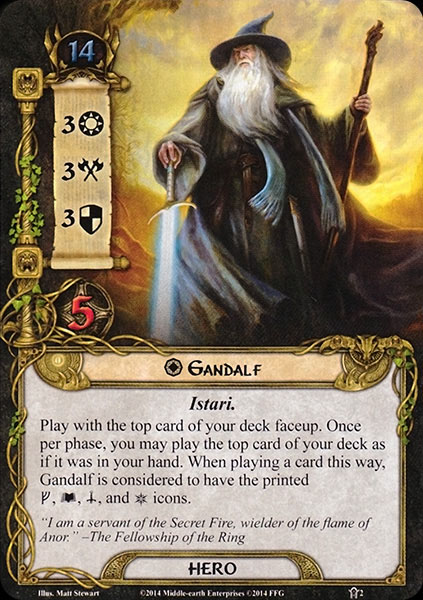 The drawbacks to running Gandalf are that you will be using the unique slot of his title for the entirety of the game. This can block other players from running Gandalf allies themselves, which makes it difficult for Gandalf players to find other players to play with. But this doesn’t matter in solo or two-handed, as you can adjust your decks accordingly. The other big drawback is that you will have a starting threat of 14 from just 1 hero. This limits your options for other heroes to mostly Hobbits if you are looking to keep your threat at a decent level.

And there you have it, some great cards that you can use to find your cards quicker and stack your own deck in your favour. If there are any amazing cards that I might have missed, be sure to let me know, so that I can add them to the list. The concept of scrying and specific card finding can be a bit blurry sometimes, so cards like Master of the Forge and Weather Hills Watchman weren’t included.