Not all traits in the game depict what race a character is, or to what faction he/she belongs. There are a couple that also denotes what the occupation of the character is. Four of these occupational traits have been widely expanded upon and have been linked with a certain sphere. This began in the Dream-chaser cycle, where we saw trait-specific cards like Scouting Party for Scouts, Captain’s Wisdom for Nobles, Last Stand for Warriors, and attachments like Rune-master and Ranger Spear for the Rangers. This focus on occupational traits got expanded even more during the Haradrim cycle, where cards started to require several traits on different characters in your deck in order to work. This allowed for a diverse deck that was not focussed on a single trait, which was the case for many decks before.

Today, we handle one of these occupational traits with one of the best-developed ones. Rangers have been introduced early and had a viable synergy even before the Dream-chaser cycle started to pay attention to the traits properly. They deal with avoiding and ambushing enemies and are a great fit for the Lore sphere.

Who are the Rangers?

The Rangers are a group of (mostly) men who tend to live in the forest. There, they do whatever they can to waylay the forces of Sauron and ambush his servants. There are two big groups of Rangers in Middle Earth: The Dunedain Rangers of the North, and the Ithilien Rangers of Gondor. Each tries to keep the wilds free of fell folk by ambushing the enemy and protecting the lands around them. The Rangers are renowned for their skill with a bow, and for their ability to sneak through the wild without being seen. This translates well in the game, where the Ranged keyword and Secrecy are powerful mechanics to use with Ranger cards. If there is ever anyone who wants to join them in the rank of Ranger, add Doughty Ranger to your decklist to grant them that trait.

The Rangers were early to the card pool, as the Rangers of Ithilien became a deck option by the time that the Against the Shadow cycle came around. The Dunedain had to wait for 2 cycles before the story took place in the cold north before they could properly enter the card pool as well. After the Angmar Awakened cycle, both factions got a smattering of cards that improved their archetype and bonded the two factions together under a unified Ranger trait.

The Ranger trait is most closely associated with the Lore sphere. Not only because the green colour fits the rangers well, but also because the tricksy Lore sphere works beautifully with the stealthy approach of Ranger decks. There are a couple of cards in various other spheres with the Ranger trait, but Lore is by far the most dominant. The Ithilien (Gondor) Rangers also have a few characters in the Tactics sphere and can use Tactics to bring even more Traps to the table. The Dunedain Rangers use more the Leadership side of the cardpool for their synergy as they need a good way to defend and accelerate their board state when engaging so many enemies.

The Ranger synergy is that of avoiding combat and trying to waylay enemies in different ways. This can be seen with attachments like Ranger Bow, which doesn’t even require the enemy to be engaged with you. The Rangers also focus a lot on avoiding enemies with effects like Advance Warning, Arrows from the Trees, and Take No Notice. T 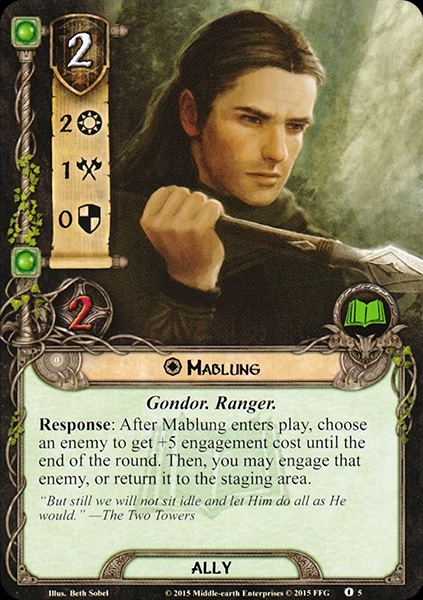 his allows the Ranger deck to set up Ranged characters and attack enemies engaged with other players. The star of this synergy is Haldir of Lorien, who can even attack into the staging area on his own if you have avoided engaging an enemy this turn.

The Rangers also make use of a lot of Trap cards, which have been covered a while back. This is generally designed for the Ithilien Rangers, allowing them to get traps out for fewer resources, and recurring them through various effects. This is combined with events like Interrogation and Forest Patrol, avoiding enemies, but still dealing damage to them.

Scouts and Rangers often work together, making them team up pretty efficiently. The two occupational traits share a lot of events like Expert Trackers and Distant Stars. Having a Spirit/Lore deck is really appealing to me, as it invites a more control type of deck, having the Scouts quest, and the Rangers deal with the enemies.

Gondor is an obvious synergy with half of the Rangers since they also have the Gondor trait. This opens up global boosts like that of Visionary Leadership and Leadership Boromir, boosting the Rangers even more. Having the resource generation of a classic Gondor deck can also accelerate the deck you are trying to make, using events like Wealth of Gondor and allies like Envoy of Pelargir. 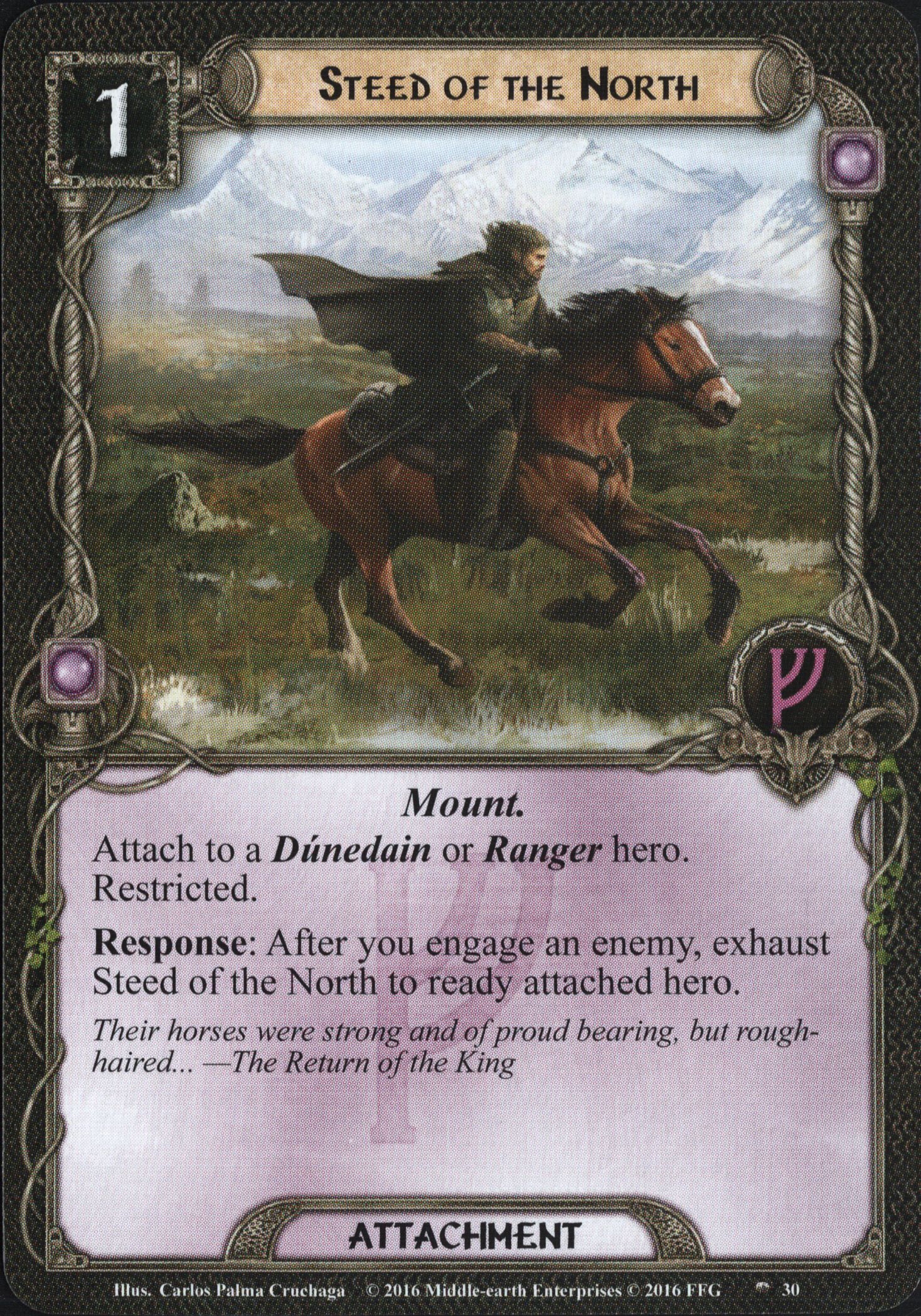 Whatever Ranger was not boosted by the Gondor trait, will get boosted by the extended use of the Dunedain trait. While this synergy is slightly less obvious, seeing how Rangers tend to avoid enemies while Dunedain engages them, there is still a bonus to be had when playing the two traits simultaneously. You can put some fail saves into place should enemies engage you, and using effects like Descendants of Kings for emergency readying effects for your characters. Quick Ears and Steed of the North also open up to this combination, allowing for some fun decks to build around. 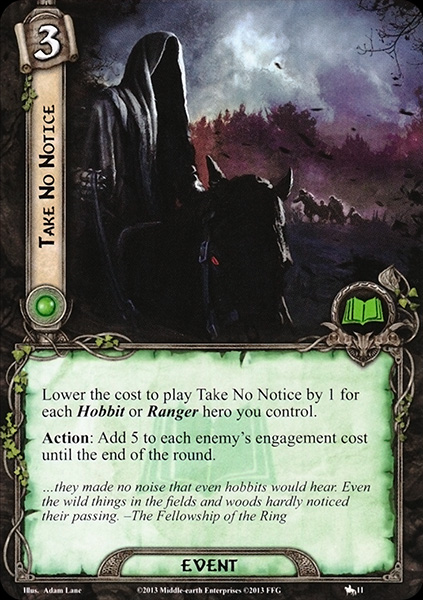 Hobbits have often relied on the Rangers, though they hardly know it. Back home, the Hobbits were aided by the Dunedain Rangers, but Frodo and Sam eventually stumbled into the hands of the Rangers of Ithilien. This results in some events like Take no Notice and In the Shadows, that work off of this synergy. Since both traits wish to avoid enemies, it is only natural that you should try and play cards from both factions in the same deck. It really improves the rate at which you can raise the engagement cost of enemies, and getting bonuses when engaging an enemy with a higher engagement cost than your threat. This can be seen in the form of the Halbarad, Anborn, and Mablung allies, who all raise engagement cost.

I will probably not focus too much on heroes and allies in this part, as they also share traits with their respective faction. You can check out the Dunedain and Gondor articles for more detail on some good Ranger options in that department. 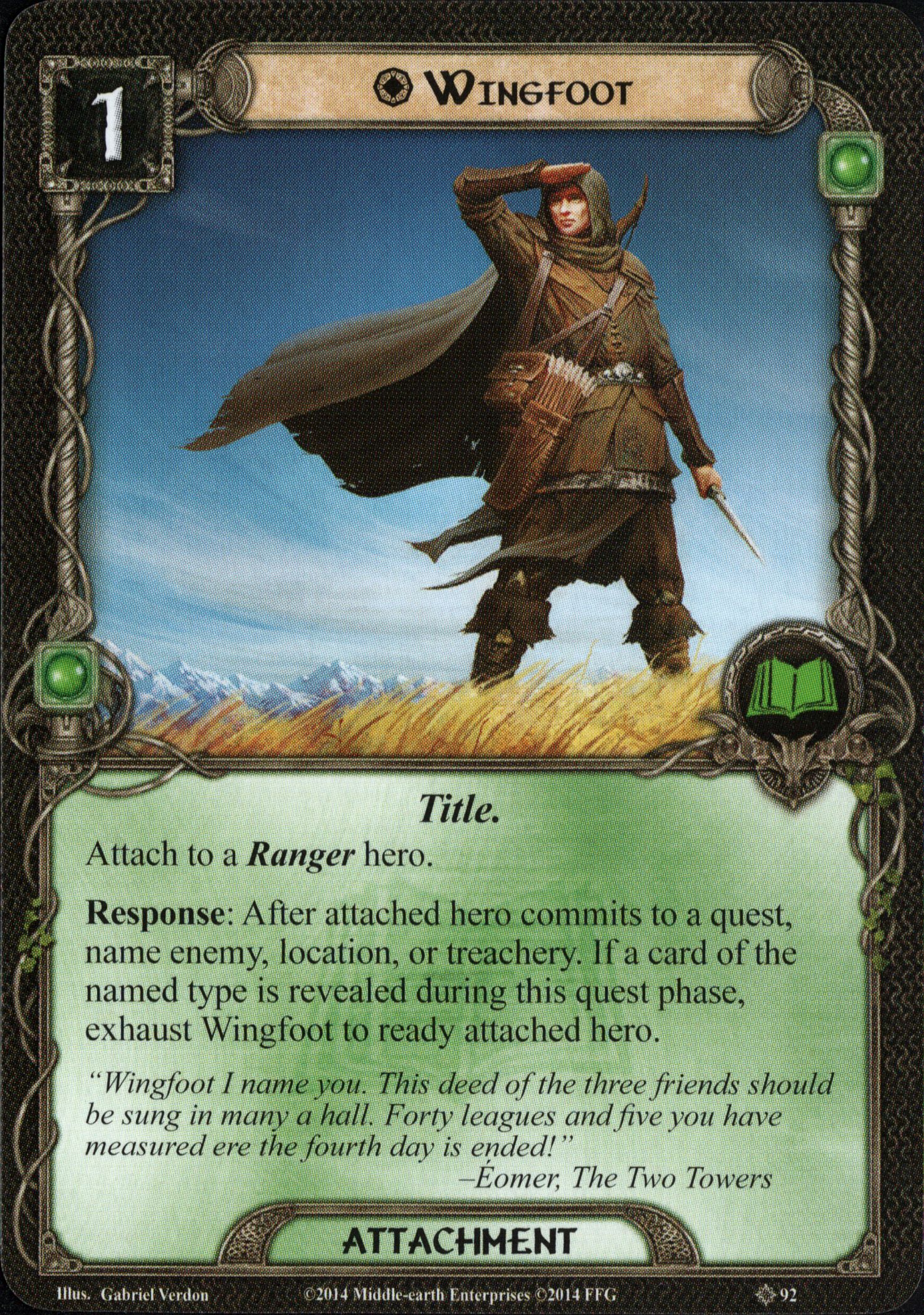 No, in this section, I will focus on attachments for Rangers and events that require Rangers to be in play. Wingfoot is the first attachment that comes to mind and is a great way to have your hero ready in a multiplayer game. While less consistent in lower player counts, the attachment can ready your characters in roughly 70% of the time, when doing some research in the probability of what kind of encounter card comes up. It is cheaper than Unexpected Courage, but can only attach to Ranger heroes. The attachment is a good way to commit your characters to the quest, while also having them ready for combat or other tricks. Combine this card with for instance Beravor, and you get to quest ánd draw cards with her. For added consistency, try to run some scrying effects, so you know for certain what cards will be revealed during staging.

Coney in a Trap is actually one of my favourites from the previous cycle. While simple in design, Rangers can always use more ways to avoid attacks. Note that this card will require both a Ranger and a Warrior traited character under your control, which shouldn’t be too difficult, as many Ranger heroes also have the Warrior trait, so having 2 of them in play allows you to play this card. The benefit of Coney in a Trap is that the engaged enemy cannot attack for the remainder of the round, allowing you to trap enemies brought in with Dunedain Hunter and Wait no Longer, and cancelling their attacks in the combat phase as well. The card is also not restricted to non-unique enemies, allowing you to use this effect on every enemy that is not immune to player card effects. The comparison with Feint is easy to make, and this card should be in your decks if you can reliably meet its requirements.

After having been rained on today, I can tell you that a Weather Stained Cloak is probably one of the most uncomfortable pieces of clothing you can have. Still, it keeps you dry I guess. The cloak has some things going for it, being a free attachment for one is not a bad thing considering the fact that Dale loves them. Second, it cancels damage instead of healing it, allowing you to save 1 hitpoint characters that would otherwise die. However, it can only attach to Ranger characters, though that is ok. What is not ok is that the card is only useful in scenarios that feature direct damaging effects to questing or exhausted characters. In that corner case, the Cloak will allow you to cancel a point of damage from the attached character. Outside quests like Weather Hills, this attachment is left in the binder, being no use to many allies or heroes.

I think that ally Damrod has got everything set against it. 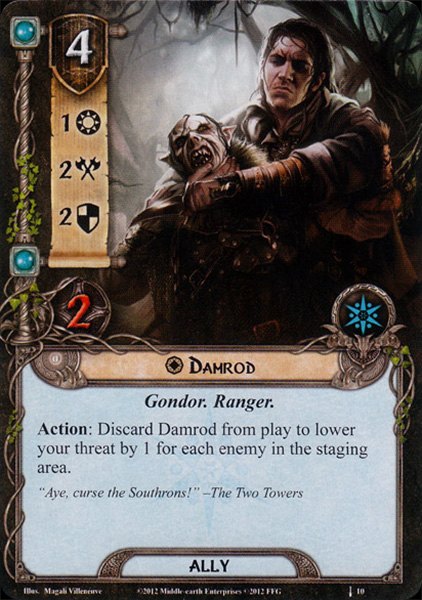 First off, the hero version of this guy is far more popular, making the ally rare to begin with. On top of this, it is in the Spirit sphere, which is an odd sphere for Rangers and for Gondor, so dedicated decks around those archetypes won’t run Damrod very often. Then there is the concern that his stats are mediocre, with low willpower for a Spirit ally, ruling him out of that as well. To make matters worse, his only ability requires that you discard him. This will lower your threat by the number of enemies in the staging area. How often does this exceed 4? This makes Galadhrim’s Greeting a far more reliable source for threat reduction than a 4 cost ally who is destined to die. Luckily you don’t have to exhaust him for his ability, but that means you can only really use him for his 2 attack strength. I can see some niche cases for either a Caldara deck that pumps out high cost allies in Spirit (for which this guy isn’t an ideal pick either way) or for a deck that relies of Fastred and Dunhere to have a lot of enemies in the staging area. In the end, Damrod is missing out in a lot of decks since he has no place in them. This is too bad, because his art is a great piece my Magali.

There is a wide variety of decks out there that make use of Rangers. Here are a couple of suggestions, but it is just the tip of the iceberg.

With the Lore side of these traits done, I feel like the next one should be the Scout trait in Spirit. I love playing a Scout deck, as it is less combat focused and deals more with location exploration and big bumps in willpower. I will be continuing this series frequently this month, as it requires less research than the scenario analyses and is perfect for writing while on the plane.