The Shepards of the Forest were not in the game until the fourth cycle. Ever since they have fulfilled a unique roll in the game as strong dependable allies at the cost of slow recruitment. During the latest two APs, the trait has gained another boost with a unique ally and a (not so unique) Hero.

Who are the Ents?

Really..? You don’t know an Ent when you see one? These massive Tree-People are one of the 3 races made by the Valar (other being Dwarves and Eagles). They are tasked by their deity to defend the forests of Middle Earth from devastation and the axes of the Dwarves. They are a rather slow people and take some time to get going. But once Ents enter the battlefield, the battle is decided shortly after. Note that there are no Huorns in the game as a player card yet. However, these lesser form of Tree folk is considered moody and disobedient without the Ents guiding them. I think it is safe to say that the Huorns and Ents are different species and that only the latter is in the game for the players.

Like I mentioned earlier, Ents were only introduced to the game during the Ringmaker cycle. There have also been some Ents in the Saga expansions to reflect their presence in the battle of Isengard.

Ents are divided between 2 spheres: Tactics and Lore. Each of these spheres has a Hero devoted to it, alongside some allies and an event. Lore Ents are less combat focussed than their Tactics counterparts, specialising in cheap high willpower outside the Leadership and Spirit spheres. The Tactics Ents are more aggressive and will take direct damage gladly. Bringing an Ent deck against an Archery-heavy quest is a good idea (provided you also bring some healing).

The Ent ally cards are incredibly cheap for their stats, but to counteract this imbalance, the developers have given all of the Ent allies the phrase: Ent-ers play exhausted. This means that you will have to invest resources into an ally that won’t be ready until the next refresh phase. Now there are a couple of ways around this. The allies are not immune to readying effects during the round they enter play. This makes them perfect targets for Hero Faramir, Narya, Grim Resolve et cetera. However, keep in mind that most of these readying effects are in the opposite spheres than where you find your Ent allies. This needs to be kept in mind when designing an Ent deck.

While the Ents may be slow to start, they are immediately

able to take damage. And this is where the Ents also shine. They have a very healthy pool of hitpoints, making them good targets for Archery damage. On top of that, there are quite some cards that trigger off of the amount of damage on Ents. Beechbone gets a boost to his direct damage, Booming Ent can get Erebor Battlemaster levels of attack, and Leaflock gets better at questing as more and more Ents get damaged. This reflects the wrath of the Ents, as they get damaged, they get stronger. The 2 Ent Heroes even have the ability to damage themselves in order to ready or have a higher attack/willpower. Keep in mind that for this synergy to survive, you will have to heal some of the damage eventually. This makes Elrond a good hero to run in an Ent deck.

Synergy with other Traits

Ents are really splashable, meaning that they can fit in any deck that requires some more allies. However, the Ents do share some effects with hobbit characters. Hobbits are a good fit with Ents, as they are usually not very aggressive. For questing the Hobbits rely on more shenanigans instead of raw willpower. The Ents also help with this. Effects like The Dam Bursts requires you to play a unique Hobbit character. Since we only have 1 unique ally, this event requires you to play with at least 1 Hobbit hero. Ent attachments like Ent Draught are natural fits for Hobbits who benefit from their relations with the Ents by gaining some much-needed hitpoints. This would otherwise require heavy armour, or shoes, and it doesn’t seem likely that Hobbit will wear shoes.

There are a lot of really good Ent cards, but some stand out above the others. This is the case with Treebeard. Because he is a Neutral ally, paying for him is easier than for the other Ents. His high stats give him good flexibility for any sort of quest. Even better, he starts producing resources once he enters play. These resources can be put to great use in an Ent deck or can be used to ready him if there are no other Ents on the table. This ally version is one of the earliest Ent cards revealed and has overshadowed his later Hero card. The ally version of Treebeard also reminds me of the early game Radagast card we got back in the day. These high-cost neutral cards seem to support their own trait and are auto-includes in their respective decks.

Another great Ent is Quickbeam in his ally form. The hero version is still new, so the debate on which Quickbeam is better is best saved for when everyone has gotten used to them. The ally version is very cheap willpower and the highest base attack stat on a Lore ally. The ability to circumvent the enters-play-exhausted effect directly is a good way to show that Quickbeam is hasty, and that speed doesn’t always solve everything. This also reminds me a little of Veteran of Nanduhirion, who would make an excellent Ent card, but alas. Quickbeam is added to a lot of decks that have 1 or 2 Lore heroes to pay for him. He is also the cheapest unique Ent, at only 2 cost.

When looking at attachments, Ent Draught is not incredibly stunning, but can definitely come in handy on any character. Especially Hobbits will benefit from having extra hitpoints. This effect is cheaper than for instance a Citadel Plate, but is limited to only 1 per character, and only if you have an Ent under your control. 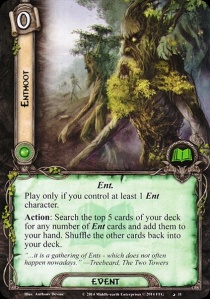 The fetch-an-Ent card that is Entmoot is to me the best Ent event in the card pool at the moment. It is also nice that this event cannot only pick Ent allies but other events and attachments as well. This card is a direct copy of The Eagles are Coming, but that is fine. I feel like many traits that do not have a complete roster of cards to choose from, should have a fetch card to find them faster.

Honestly, I have had amazing plays with all of the Ent cards, sure there are some that are used less often, like Treebeard and Quickbeam, but that is because they have other iterations of themselves in the card pool. The other unique Ents are also included in fewer decks, besides the dedicated Ent decks. This is probably due to their uniqueness, making them filling your hand if you have already got one on the field.

If you are not playing a quest that has any Orcs in it, Skinbark loses a lot of his potential. Still, a base 4 attack is nice to see on a 3 cost ally, but the defence piercing effect on him is why you actually use him. Still, Skinbark can be considered a good Ent card in quests that involve enemies like this.

There are a couple of decks that are worth to check out, some focus on getting Ents on the table as soon a possible, while others explore the possibilities of the Ent Heroes and how they interact with Hobbits.

So concludes this trait analysis on the walking trees. We are currently working hard on bringing you the analyses of the Dwarrowdelf cycle, so stay tuned for those.

For more information about the Ents, check out this post from the Hall of Beorn.