The Shire brings forth one of the most enjoyable traits to play: Hobbits. These hairy-footed halflings got developed during the very first Saga box of the Lord of the Rings Saga but had a lot of love right from the start of the game. Bilbo Baggins was the very first Hero we received outside of the Core Set, and Frodo followed not far behind. Over the years, the Hobbit trait has been expanded upon and has even seen cards as recent as The Mountain of Fire, where 2 Hobbits play a major role in the narrative.

Who are the Hobbits?

If it is short but has no beard, you are probably looking at a Hobbit. The halflings hail from the Shire and used to reside on the Banks of the Anduin. The game only features Hobbits from the Shire and does not differentiate between Baggins, Tooks, Brandybucks, Proudfoots (Proudfeet!), or any other family.

Whilst developed during the Black Riders Saga expansion, the Hobbits have been around longer than you might think. Over the years there haven’t been cycles in which the trait got fully developed, but it settled over time with the continued release of more heroes, allies, and helpful abilities.

The Hobbits span all 4 spheres of influence, with an equal amount of cards in all of them. However, they are not a very combat focused people, so Tactics often relies on support from other traits. The introduction of Tom Cotton has helped the Tactics side of the Hobbits a bit more, as he buffs your Hobbits in the round they enter play. Leadership only has Sam as a Hobbit hero, so a mono-Leadership Hobbit deck will be difficult to make. Mono-Lore and Mono-Spirit are viable, with enough heroes and enough cards to make a complete 50 card deck. However, mixing spheres in one deck is adviced, the strength of the Hobbits comes in their variety of spheres. You will want cards from Leadership (Bill the Pony, Rosie Cotton), Lore (Fast Hitch), Spirit (Hobbit Pony, Hobbit Pipe), and Tactics (Tom Cotton, Raise the Shire).

The Hobbits are a very secretive folk, and that is reflected in their low threat cost. Their threat cost is usually between 6 and 8, which makes them very good options to include as the third hero in a deck. However, the low threat cost is reflected in the Hobbit’s base stats. Mainly their hitpoints is a concern in many decks, as a 2 Hitpoint hero is not very reliable against quests that have a lot of direct damage and Archery. Finding ways to boost hitpoints on Hobbits is easy, Bill the Pony, Boots from Erebor, and Ring Mail should definitely help you if you find your heroes dying often. 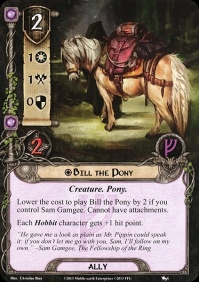 The Hobbits often like the comfort of home and friends, so some abilities require you to play with 3 Hobbit Heroes. Since there are as of this moment no attachments which grant heroes the Hobbit trait, you will be forced to build a 3 Hobbit Hero deck. But don’t worry, the trait is developed enough that you can build some good decks with that restriction.

During the more recent cycles, the Hobbits gained more synergy with their Pipes, Songs, and Ponies. Most of these synergies focus on the questy nature of the Hobbits, with many ways to boost willpower and commit Hobbits to the quest outside the normal phase.

Hobbits like to team up with Rangers. Whether it is the Rangers of Ithilien that helped Frodo and Sam or the Rangers of the Dunedain that protected the borders of the Shire, Hobbits and Rangers share a couple of cards that help you raise the engagement cost of enemies, and effects that play off of that. It helps that the engagement synergy is shared between the two traits.

Hobbits fit Dwarven clothes, so attachments like Ring Mail and Boots from Erebor are designed for the smaller races of the free peoples, though I find it hard to believe Hobbits will put on Boots. 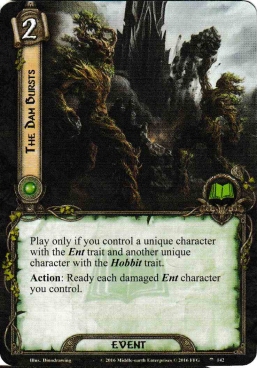 Hobbits and Ents are also a combination that is starting to be developed. This is to reflect Merry and Pippin taking on Isengard with the Ents. The Dam Bursts will require you to have two heroes with Hobbit and Ent traits. Ent Draught is also a very good attachment to put on your Hobbit heroes as it will raise their hitpoints. It is also a thematic win!

Bree cards are rare, but they do support the Hobbit trait. Barliman Butterbur is a good defensive option if you play with 3 Hobbits. However, beside him, this trait has not been developed yet.

Hobbits have a lot of cards to choose from, and many can fit different play styles. I find myself including Fast Hitch in a lot of Hobbit decks, as it is cheaper readying for Hobbits. It is also a Skill which makes it harder to lose in quests like Foundations of Stone or Dunland Trap. 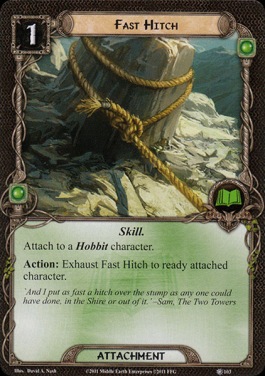 Bill the Pony is an auto-include in any deck that has Sam in it. Being able to buff hitpoints is vital to the survival of your Hobbits. The pony even has a point of attack power that may come in handy.

The ally form of Sam is included in a lot of decks that feature Spirit Frodo. He is an amazing ally with solid stats at 1 cost, and you can even buff and ready him. Be careful with the uniqueness though, as Hero Sam is also very popular in Hobbit decks.

I find that Good Meal is a bit undervalued, you will be able to play a lot of expensive events for far less with this attachment. Since it is free and neutral, it is also a good target if you need to discard an attachment due to an encounter effect.

Rosie Cotton is a very good ally as she is able to buff the stats of other Hobbits with her willpower. You can even ready her after she has quested, and commit her willpower again to another Hobbit. If you buff her willpower, things can get out of hand quickly.

Keen-eyed Took is considered a complete miss and a terrible card to include in your deck unless you really have no other choice. He does nothing to help your board state, other than peeking at the top card which might be useful for Dwarven Mining. In multiplayer he can be considered a grief card.

Fatty Bolger is often excluded from a lot of decks that use only the Black Riders box. He doesn’t synergise well with the low threat that Hobbit decks require unless you focus on threat reduction. Though he is not popular, he is still playable.

Hobbit-sense is also a card that got removed from most decks once better options were available. It requires you to play only Hobbit heroes, which isn’t impossible. However, the fact that you cannot declare attacks against enemies doesn’t help you at all. Note that you are also not allowed to declare Ranged attacks against other enemies. Enemies that are immune to player card effects will still attack even if you decide to ditch 2 resources for this event.

Spirit Pippin is another Hero that is rarely used. He requires you to have an all Hobbit line up of heroes before he does anything. Even if you do put him in a Hobbit deck, his effect is mediocre at best. You can engage an enemy and trigger your Higher engagement cost buffs, and then return him to the staging area for 3 threat. In my opinion, that is not worth it and you will find yourself playing his Lore version sooner. 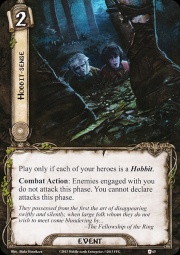 This analysis was recommended to me via the Discord group of Cardboard of the Rings. If you have suggestions for new traits to analyse, or if you want to write one yourself, comment below, or contact me via Twitter, Facebook, or Discord.