Our first Snow mission takes us the same path as the Fellowship as we tackle the Misty Mountains, only this time we go the opposite direction. This quest is notorious for killing a lot of allies simply because they don’t have enough willpower. We have seen the return of needing a lot of willpower on characters during the Harad cycle. The Orc enemies there get worse as your characters have less willpower. In the early days, this quest was difficult as there wasn’t a lot of ways to increase willpower. These days, Dwarves and Gondor have plenty of global willpower buffs, making the quest easier. Think of Sword that was Broken, Faramir, Visionary Leadership, and Dain Ironfoot. However, Caradhras is not beaten that easily, let’s face the icy cold of:

The Setup of this quest has all players remove all copies of Snowstorm from the encounter deck. These will be shuffled back in later. Then, the players search for the unique Caradhras location and add it to the staging area. This starts your threat off with 3, but this will be increased later. While players can’t travel to Caradhras, they are able to put progress there. Don’t clear the location yet though, as it will return from the victory display at the end of stage 2.

The B side of this quest card looks remarkably empty, so the developers decided to add their standard When Revealed effect to it. This will add 1 card per player to the staging area. There are a couple of really nasty effects that can trigger with this effect though. Revealing a Mountain Troll might be too early for most decks, and Fallen Stones will surge into 2 new cards (because there is no progress yet to remove). But the absolute worst card to reveal now is Avalanche! This card will ruin your chances of making progress during this turn. Avalanche will exhaust every ready character, making it hard for you to commit characters to the quest next phase. Cancelling this effect might seem a bit early, but is definitely worth it. There is only one copy of this card in the deck, so best to see it gone early. There is probably 1 card that is good to have revealed during this time: Black Uruks. Their When Revealed effect is pretty mild, and won’t discard a lot of attachments, even during the questing phase.

The rest of the stage is pretty mild, no real challenges have come up yet. This is the time where you want to clear your side-quests and assemble enough victory points by maybe clearing a couple of unique locations. The 9 progress tokens required to pass the stage should be easy enough, as there are no Snowstorms in the deck yet.

This is where the weather turns foul and you will start to struggle to make progress. Once players have flipped the quest card to stage 2B, they are instructed to shuffle X copies of Snowstorm into the encounter deck, with X being the number of players plus 1. This treachery will now become the bane of your questers, as you can very easily lose willpower at this point.

You should have cleared whatever side-quests you wanted to complete during the last stage, but if you are just a couple of progress short, you might be able to complete it at this stage. The 11 progress for this stage will be harder to place than you might think, especially if you are encountering some enemies at this point.

Once you manage to place the 11th progress token on the second stage, you immediately discard the active location and make Caradras the active location. Now here is where the wording is a bit odd, but in case you had a location with Victory Points on it (Fanuidhol, Dimrill Stair, etc) you do not collect those points as the location is discarded before it gets explored. Remember that quest card effect happen before the effects on the locations. Therefore, it is not a good idea to have a location worth victory points active once you clear the stage, try and clear them before or after the trigger on the quest card.

This is where things take a turn for the worst: the static effect on this quest stage will have you discard any character the moment their willpower is 0. This means that you will have to tech against this quest in order to not have to discard any heroes. Allies will definitely perish in the snow, making your combat phases harder. Offensive and defensive characters usually don’t have a lot of willpower, so you will either have to boost their willpower, or bring different characters.

Once this quest card is revealed, all Snowstorm cards that are in the discard pile, get shuffled back into the encounter deck. This will make it very likely that you will encounter some more Snowstorms during the following turns. These chances increase as you play the quest with more and more players. Committing characters after staging to the quest will be a good way to save some of those characters and still make progress on the quest. In order to make a lot more progress, you will have to clear Caradhras fast. You can do this with location control, or you can move it out of the active location slot to negate the Mountain’s debuff. Be sure to be able to clear it once you switch it for something else, as the 3 victory points might be crucial to your victory.

This brings us to the win conditions of this scenario. In order to win, players must have 13 progress tokens on this stage and own 5 victory points. Luckily, recent player cards will also count towards your victory score, making the scenario easier. Player side-quests and cards like Justice Shall Be Done are a good way to ensure you don’t have to wait until the encounter deck hands you a tough location. Once all these criteria have been met, and Arwen is still alive, the players have won the game and can now sink their teeth into the treacheries of the next adventure pack: Road to Rivendell.

(please note that these stats are the encounter deck at the start of the game, they do not include Snowstorm, Caradhras or Arwen Undomiel.)

There is quite an even distribution between the 3 types of cards you can reveal. This makes it hard to correctly guess with Wingfoot.

Arwen Undomiel has become a staple in many Spirit decks with her Hero and Ally version. This is the first time in the game we encounter her, this time as an objective ally. Note that you are not allowed to bring any other version of her to the quest (sorry Noldor players). Your objective will be to keep Arwen alive. While she may not get killed during combat, there are some combos in the encounter deck that can kill her on stage 3. This makes the quest quite frustrating so I would recommend boosting her willpower once you hit that stage. Even boosting it by 1 can make the difference between victory and an icy defeat. Think of effects like Faramir, Lords of the Eldar, and Sword that was Broken as ways to boost her willpower.

Arwen also has an effect that will have you commit her to the quest a lot. Every time she exhausts, she adds a resource to a hero’s resource pool. This will make it easier to fund your cards during the next planning phase. There are as of yet no other effects that can have you exhaust her without committing her to the quest or using her as a defender (why?) or as an attacker (again, why?). A card that I would definitely consider for Arwen is Late Adventurer. This will allow her to commit her 2 willpower to the quest after the Snowstorms have laid waste to your other questing characters. If you are on stage 3 and reveal 2 snowstorms, it is game over for everyone. Another strategy, to play it safe during the final stage, is to exhaust Arwen only during the attacking step of the combat phase. Sure, she can’t deal any damage on her own, but at least you gain a resource for the next round. 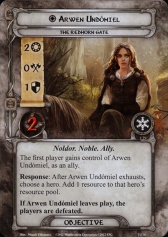 As you pass through the Redhorn Gate, there are a number of Mountain locations you can encounter. Some of these are the unique 3 peaks of Moria. Since most of the locations are Mountain traited, Dwarves will have a distinct advantage by playing effects like Ancestral Knowledge and Ever my Heart Rises!

These treacheries are meant to illustrate how hard it is to traverse a snowy mountain pass. And man, do these treacheries suck. They will sap away your resources, add more cards to the deck and staging area, and above all: they reduce your willpower. There are quite a number of cards that are very much worth it to cancel in order to save resources or characters.

The passage over the mountains is home to a variety of enemies. Creatures, Orcs, and Trolls will make you want to keep up a couple of defenders after the questing phase. This encounter deck is also the first time that we use the Misty Mountains encounter set so I will cover the 2 enemies in there as well.

A quick note on the shadow effects: A lot of show effects get worse if the active location is a Mountain location. This might have influence on whether or not you will travel, or clear the location in the staging area. The absolute worst Shadow effect on an encounter card is that of Snowstorm, which might discard your defender, causing you to take the attack undefended. This is a quick way to lose 2 heroes. Bring cancellation, or raise everyone’s willpower, so that these effects do not get the chance to trigger.

10 thoughts on “The Redhorn Gate”