This quest was made even before the Saga expansions were announced, so in order to relive the movies a little, the developers gave us this quest where you will battle the Tentacles from the Watcher in the Water. This enemy will make its return during the Saga scenario’s in The Ring Goes South, as the final boss of the quest. This quest has been a bit controversial, as there were 2 paths the players could take to defeat the final stage: Either kill the Watcher or speak the password and enter the mines through the Door of Durin. Nowadays, players have a lot more options to get 3 Victory Points, making this scenario poorly balanced. If you really want the true experience of battling this ancient creature, try to kill it instead of cheating and clearing 3 side-quests.

The Watcher in the Water

The Setup for this scenario is relatively easy, as players are instructed to remove The Doors of Durin and The Watcher from play. These will get added to the game once players make it to the second stage.

Once all cards have been added to the staging area, the stage can begin. There is nothing special about this stage, you just have to make the 13 progress. During this time, players are advised to set their board state up, to prepare for the Watcher on stage 2. Players can also decide to clear a couple of side-quests during this time.

The stage will require just 5 progress tokens, which can be obtained during the next quest phase. Note that any progress that is placed on Doors of Durin (the active location) are instead placed on the current quest card (main quest or side-quest). Then, players need at least 3 Victory Points in order to win this scenario. This can be done in 3 ways:

1. Use player cards with victory points as a cheating way around the other 2 options

When this scenario came out, there would be no player side-quests for many years to come. Even other player cards with victory points were far off and would be too rare to get 3 copies off in the victory display. These days, players are far more likely to complete their own side-quests and play cards like Fall of Gil-Galad, Red Arrow or Justice Shall Be Done. This way, players can very easily obtain victory points during the first stage, and only need 5 progress tokens on the second stage to win. Though it may not be the intent of the scenario, it will be a very easy way around it. Players who are playing these scenarios progression style without a restricted card pool may choose this option to get through this scenario fast.

2. Clear the Doors of Durin

This is slightly harder than shouting: “MELLON” at the card. The unique Doors of Durin location cannot be explored with regular progress or by using location control. Instead, players have the option each round to discard any number of cards from their hand. Then, the top card of the encounter deck is discarded and compared to all discarded player cards. If the first letter of the encounter card matches the first letter of any discarded player card, the Doors open and players have obtained the 3 required victory points. If they also already have the required 5 progress tokens on the quest, they immediately win.

This option has been quite controversial, as the chances of you picking the right cards are very slim if you don’t build your deck accordingly. In the Tips and Tricks segment, I have linked all the first letters of the encounter cards and the matching player cards. To have the most chance at winning this way, have everybody discard a card that has a unique letter, there is no point in discarding 2 player cards that start with an S. Analyse the encounter deck for what letters are on the cards, and how often they appear in the deck. Also, keep a close eye on the encounter cards in play, and in the staging area, as that may influence your discarding options. For instance, if Ill Purpose is in the discard pile, there is no use in discarding Imladris Stargazer, as there is only 1 card in the scenario that starts with the letter I. 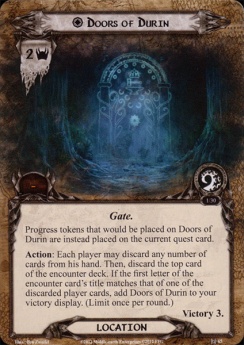 This is easier said than done. The Watcher is an absolute tank with 7 defence and 9 hitpoints. On top of this, it will regenerate 2 of these hitpoints at the end of each round. This can only heal the Watcher up to his original 9 hitpoints. Then there is the problem with the fact that you are not able to engage the Watcher while any other Tentacle enemies are in play. You will have to defeat all of his tentacles in order to face the body of the Watcher. Having just shuffled all Tentacle cards back into the encounter deck will make this difficult. However, the text on the Watcher only talks about optional engagement, not forced or engagements via player card effects. Having the Watcher in an Ithilien Pit that someone played during the previous stage will make it legal to attack it. Hands Upon the Bow will allow any Ranged character to do some damage to the Watcher, but it is very unlikely that you can kill it. Events like Tireless Hunters and The Hammer-stroke will cause the Watcher to engage a player. You can also bust out Son of Arnor to engage the Watcher.

So there are plenty of ways around the optional engagement limitation, but now you have this big enemy engaged with you, what next? Well, the Watcher doesn’t really have a crazy attack value or ability that raises his attack stat. Shadow effects aren’t very common, but it could boost the attack strength of the Watcher up to 8 maximum (Ill Purpose as Shadow card). This can still be managed by a beefy defender like Beregond or Boromir with Blood of Numenor attached. Defending the Watcher shouldn’t be a problem, though you must be careful that you keep that defender alive and ready to defend. Chump blockers are also allowed to defend the Watcher, there is no penalty for that. Feed some Snowbourn Scouts or Squires of the Citadel to the beast.

The hardest thing about the Watcher is effectively killing him. The 7 defence dictates that you should bulk up all your attack strength into 1 attack dealing 16 damage to it. This way, you circumvent the Regenerate keyword and will only have to face the defence once. If this is not possible, try to lower the defence of the Watcher with Rivendell Blades or Marksmen of Lorien. This should make attacks against the Watcher easier. Direct damage is also a great way to circumvent the high defence, Galadhon Archer, Dwarrowdelf Axe, and Spear of the Citadel can place those few extra points of damage on the Watcher. Be careful that this damage will get removed from the Watcher 2 at a time at the end of the round. 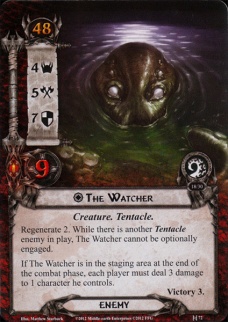 And that is it, you have gathered 3 victory points at least, and are now ready to face the Long Dark of Moria. The road behind you is shut, the only way left is forward, into the mines of Khazad-Dum.

With a lot of enemies in the encounter deck, this is definitely a scenario to bring your combat decks to. Having only a 1 in 3 chance of a shadow effect will make the Mountain Wargs very likely to bounce back to the staging area. Try to find a way to engage them from the staging area after they have attacked. Tactics Aragorn will be a good choice for this.

The new enemies in this scenario represent the many Tentacles of the Watcher itself. They are supported by the enemies from the Misty Mountains encounter set. The Tentacles sport a high attack but little to no defence. They also have a very low engagement cost so Secrecy decks will struggle with this scenario. 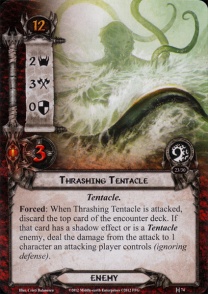 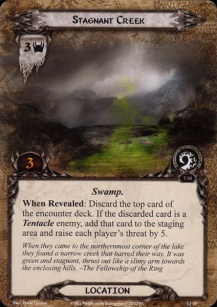 Being around an ancient tentacle monster will surely bring a couple of nasty treacheries along with it. The scenario also features Bitter Wind. This treachery strips away resources from players, making them less likely to field a big army of allies to chump the Watcher with.

7 thoughts on “The Watcher in the Water”