Skip to content
durinsfather Shadows of Mirkwood, The Hunt for Gollum 25 September 201821 May 2021

For many, Hunt for Gollum was their first Adventure pack, but it left the players a bit disappointed. The quest was very swingy with early cardpool cards and became easy in the later life of the game. To make the quest more interesting, the Nightmare version was released a few years after the regular AP. This version adds more ways to lose the game but adds more flavour to the quest where you are really fighting troops from Mordor for the Signs of Gollum. I have come to like this version of the quest over its Normal mode since it adds more dread when you are revealing clues or are looking at cards during stages 1 and 2. In this article, we will take a look at what cards were added, and what new mechanics improved the quest, while also making it harder to beat, even with current decks.

There are a couple of new rules and conditions that apply to the Nightmare version of this quest. The first to mention is that the players lose if 4 of the Clue cards are ever attached to Mordor traited enemies at the same time. This means that the players will have to hang on to all Clues, preventing enemies from obtaining them. The enemies will obtain these cards faster because of the Forced effect on the Nightmare card. This ability will attach unclaimed objectives to Mordor enemies in play at the end of the Refresh phase. Even if the card is guarded by another encounter card, it gets detached and attached to the enemy instead. When attached to an enemy this way, the objective is considered to be Guarded by that enemy. If there are no Mordor enemies in play at the end of the refresh phase, this effect does nothing and players can ignore unclaimed Clues. These new rules make it likely that enemies will be in control of more Clue objectives, and that the players will be forced to kill the enemies in order to regain control over the objectives.

The basic setup for these Nightmare scenarios follow the rules on the new rulesheet. It requires removing some specific cards from the normal encounter deck and replacing them with the new Nightmare cards that were in the pack. This sets up the new scenario. Players will have to resolve this set up before the setup text on quest card 1A, though the order rarely matters. For this quest, the setup remains the same as the original quest. 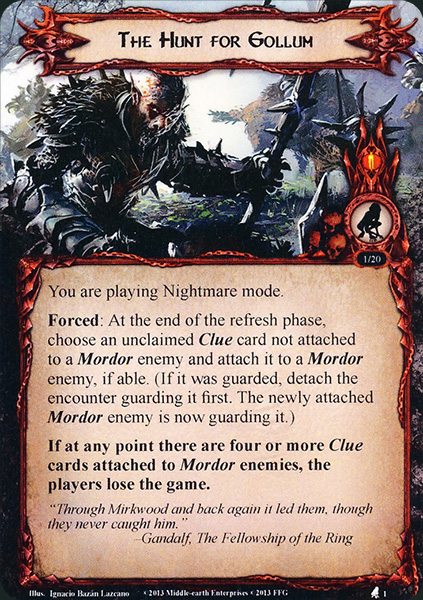 The quest plays a lot as usual, with no different setup at the beginning of the game. With more difficult cards in the encounter deck and the easier ones taken out, you will likely face more threat in the staging area on average than in a Normal game. Since location lock is now becoming a serious issue, it will not a wise to pick locations for the quest effect on stages 1 and 2, but instead, go for something else. Do not pick a clue under any circumstance. These clues will find their way into play on their own, taking them from the encounter deck will only cause more problems. 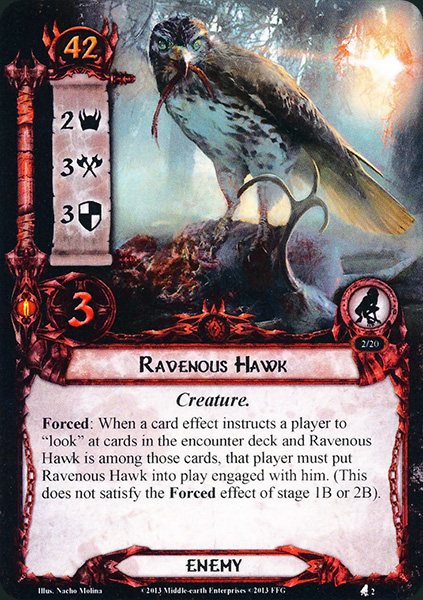 Try to keep as few clues in play as possible for as long as possible. While this will force you to stall a little before you can advance to stage 3, it will keep the enemies at a low enough level that you can easily handle them. Having no Clues will, however, start to trigger effects like Watched Path, so eventually, you will want to pick up one of the Clues, but don’t let them snowball out of control. This quest can be lost in the blink of an eye if you happen to have multiple clues come out at once. Scrying can alleviate the problem by dumping all but 1 Clue on the bottom of the deck or in the discard pile.

When questing on stage 1, I would advise bursting through the stage as quickly as possible. This allows you to bypass several turns of looking at the top 3 cards, potentially revealing a Ravenous Hawk on top of another encounter card. Passing stage 1 into stage 2 gives you one turn of not revealing any additional cards, allowing you to set up your deck a little. 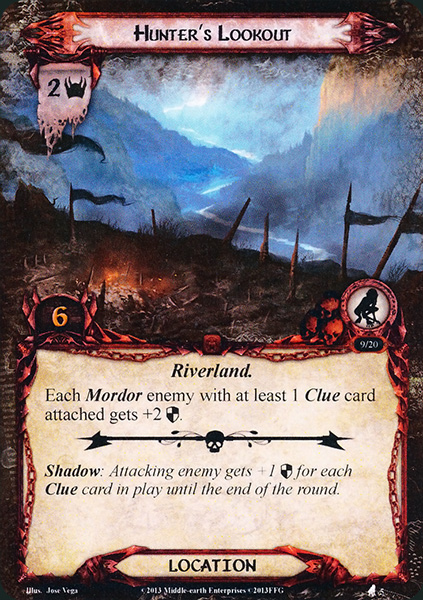 On stage 2, it is important that you start clearing locations since more will pop up due to the effect on the quest card that happens before committing to the quest. The locations in this quest have a lot of threat but can usually be dealt with by adding some location control cards to your deck. This only leaves the Nightmare locations, which can either be blanked or be travelled to. During this stage, you will also want to find at least 1 clue per player before you advance. This allows all players to quest at the final stage, finishing this scenario quickly. However, getting more clues on the table will also mean that the enemies are becoming a growing threat. You will need to have a plan in place to deal with Hunters from Mordor that will be attacking for a lot, or contributing a lot of threat to the staging area.

After the players reach stage 3, the game becomes a bit easier. You are now no longer revealing an additional encounter card per round (which is especially difficult in true solo) and now only need 8 progress on the quest to win. I will again state that rushing this part of the quest is your best bet, as you cannot allow yourself to lose all of your Clues and being set back to stage 2. Luckily, the Evil Storm is now out of the encounter deck, allowing you to bypass that broken combination if that treachery would be revealed. Questing hard will be rewarded in this scenario, for if you place the eighth progress token, you win immediately. This allows you to move on with your Nightmare campaign to the Carrock, where a new quest stage and a new two-headed Troll are waiting for you.

The new enemies in this version replace some of the weaker Goblins from the original quest. They engage pretty easily, which can be troublesome if you also have other enemies still engaged with you. There is also a new Mordor enemy introduced, which will snatch up clues if you are not careful. 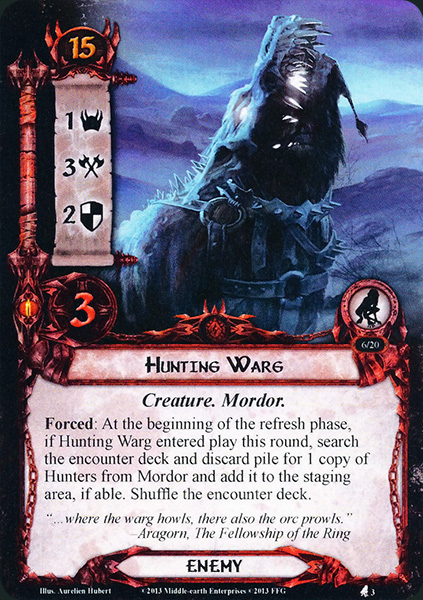 A common strategy with the Normal version of this quest was to run a bunch of location control cards. Northern Tracker and Asfaloth made short work of the original locations which made the quest so easy. To counter this strategy, the Nightmare version offers 3 new locations that are either immune to some forms of location control, or take forever to clear. 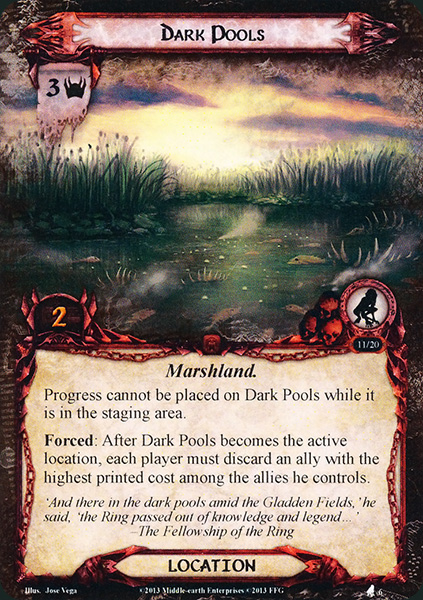 The treacheries in this Nightmare version are built around you losing Clue objectives, and the enemy gaining them. It also doubles down on the anti-location control aspect of the quest in the form of a new Condition attachment. 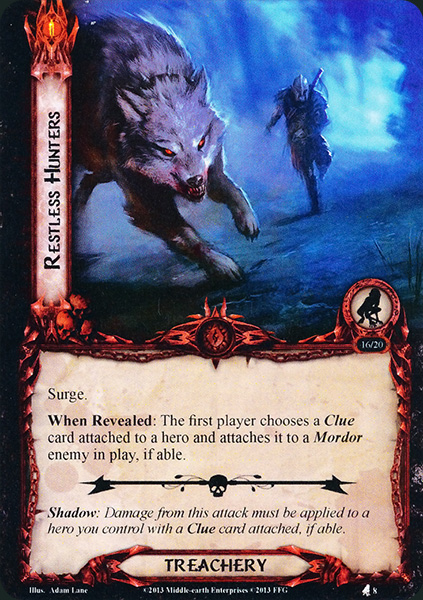 I hope this article will have you explore this quest again. I have found it a decent challenge, but not on par with some of the other Nightmare scenarios I own. It is great for entry-level Nightmare players, and the theme is improved massively. The next Nightmare scenario will likely be Steward’s Fear, as that is the only other NM pack I currently own. But with the Patreon support and the Con of the Rings coming soon, I will likely have a new batch of NM quests by the end of next month, so then I will continue this series.