The Oath is the first quest in the Two-Player limited edition starter set for Lord of the Rings the Card Game, which is a living card game by Fantasy Flight Games. It was included as part of the Collector’s Edition for Lord of the Rings the Living Card Game, which is a digital card game by Fantasy Flight Interactive. Confused? Basically, the Collector’s Edition was a subtle way to bait the conservative LOTR LCG players into pre-ordering the digital card game. The deal was that you pre-ordered the digital game, you also a shiny two-player starter set, which the fans have argued that the game has been in need of for years. The set includes two decks in a beautiful new art style which highlights the art, which contains two brand new heroes never seen before! Additionally, the box contained two new quests in the same card frame design- the Oath and the Caves of Nibin-Dûm. As of current writing, the heroes will eventually be released, but the quests will not, which has been a fairly controversial decision among fans. The Oath attempts to create a new entry point into the game, as a modern version of Passage Through Mirkwood. Hopefully, it will be used to lure many new players into the hobby.

Geographically, this story takes place in Mirkwood, in the same surroundings as the core set box. However, in this story, we are not delivering messages, but tracking a band of ravaging goblins that have raided a woodman village, and taken the villagers captive.

Setup and quest card 1: After the Raid – 9 progress

Quest card 1A will instruct you to set aside the Goblin troop which will be the boss of the scenario. A 3/5/3 statline is not too tough by today’s standards but can provide quite a challenge for decks that do not run a dedicated blocker. 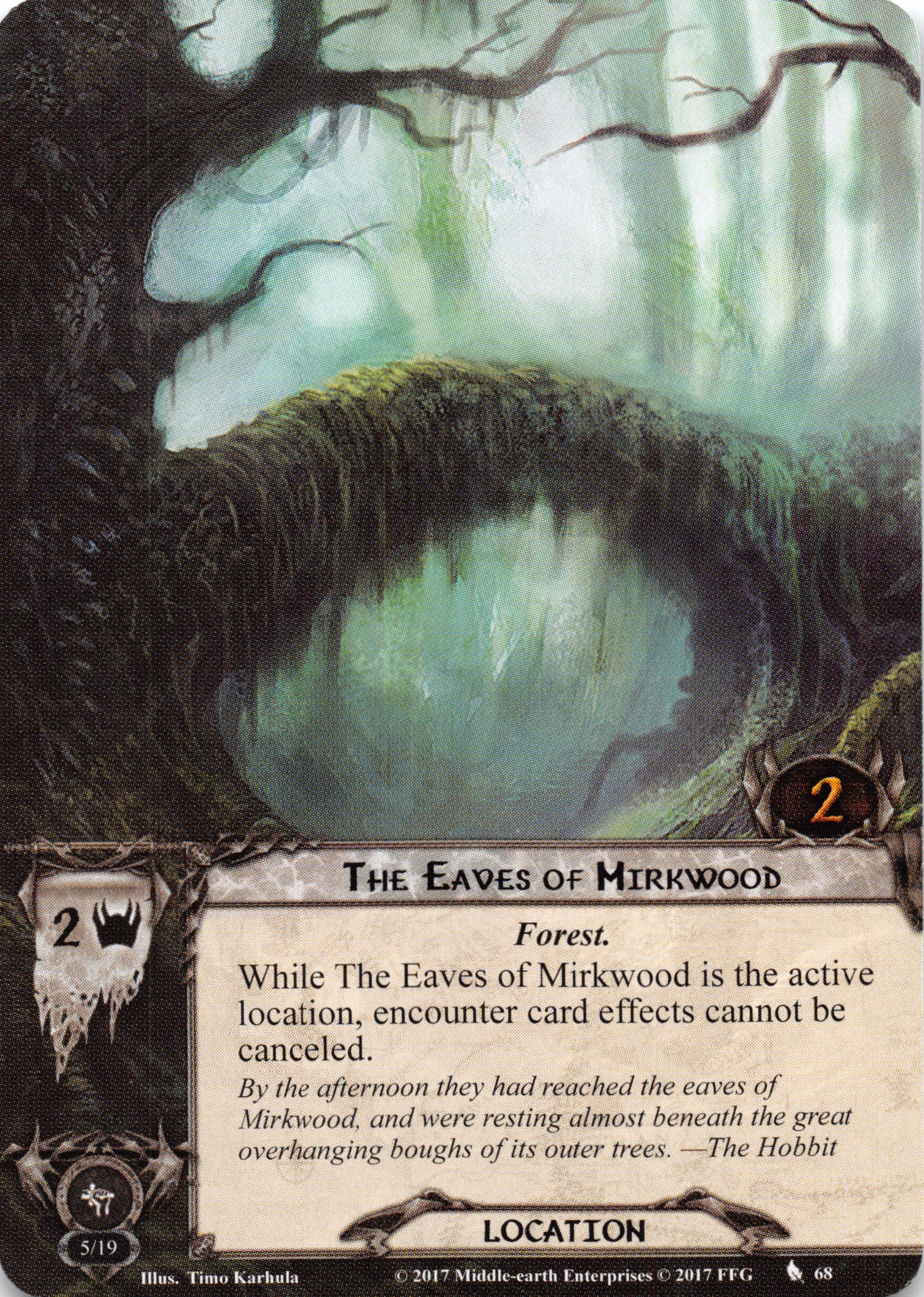 6 hit points also means that you may not be able to deal with them in one turn, and puts the troop outside of Gandalf bomb range. Finally, they make other goblins more dangerous by adding +1 attack and +1 defense to other goblins engaged with you while goblin troop itself is engaged with you. This can mean that you become swarmed, unable to clear enemies because of higher defense. Additionally, the troop is immune to attachments, so no Forest Snare and no Ranger’s spikes. However, at this point, we are still tracking the troop so they are not of immediate concern to us. Just keep in mind that a boss fight is ahead. 1A also instructs you to fetch 1 copy of The Eaves of Mirkwood (no scaling with player count!) and add it to the staging area. While the Eaves is the active location, you cannot cancel encounter card effects (so no circumventing nasty effects with A Test of Will!). Stage 1B requires 9 progress without any Forced effects or special instructions. This is prime turtle territory and allows you to build up a board state, clear out enemies that show up, and remove locations as they appear. While the decks in the starter set have no side quests, this is ideal side quest territory, as you are not really punished for lingering, as long as you can handle the threat ticking up. 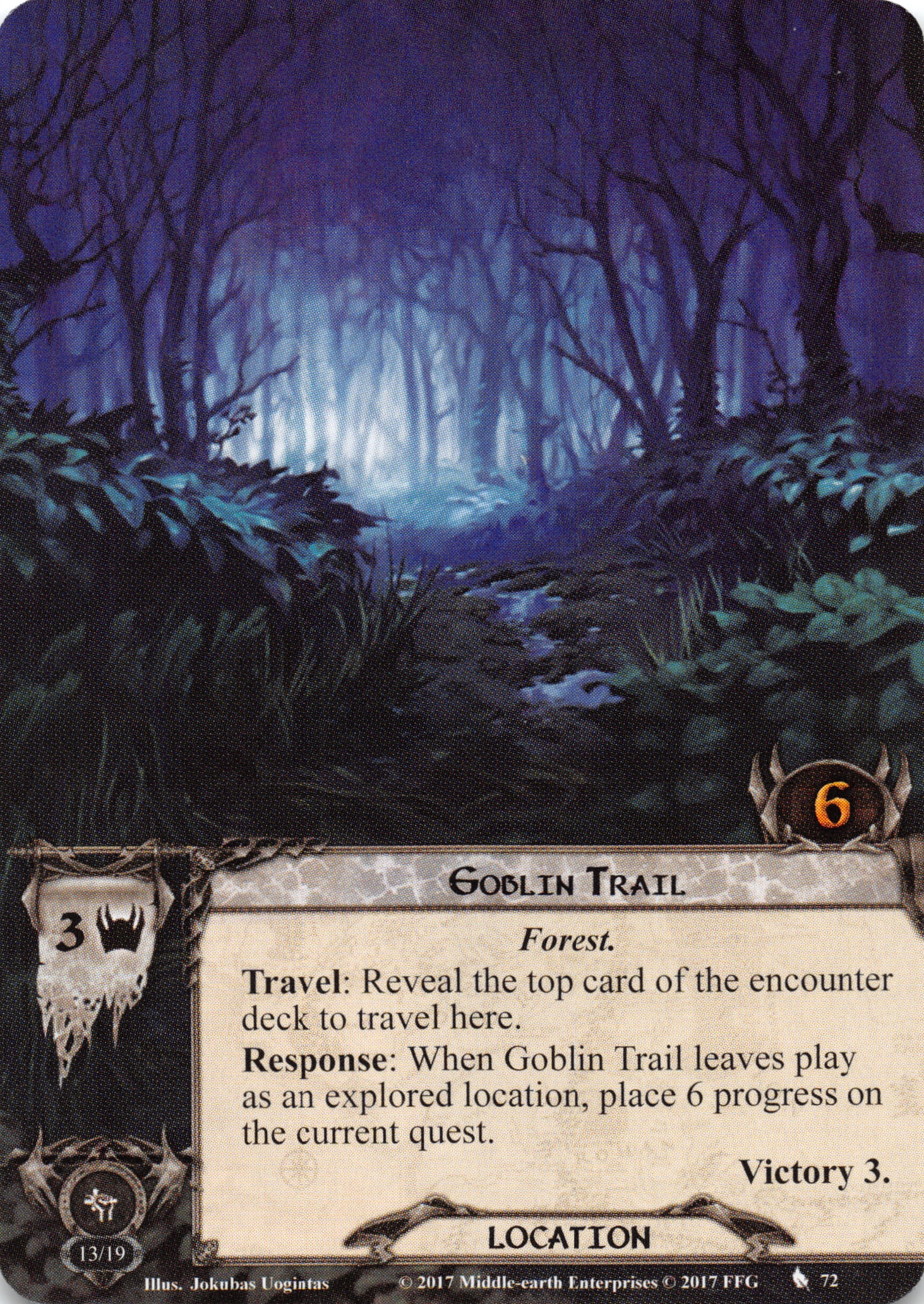 Once you add the ninth progress, you move on to the next quest card with trembling hand. What terrors will the encounter deck unleash? What will you have to face? Are the goblins coming down for a final showdown or a dangerous pursuit? The answer is… No. You are given some flavour text and immediately advance to stage 2B. 2B has a When revealed effect, instructing you to search the encounter deck and discard pile for a forest location, and add it to the staging area. This is actually an important moment in the quest because if you have left a bunch of locations in the staging area already, you run the risk of getting location locked. I will go through the various forest locations below, but at the moment the main thing to keep in mind is that you need a copy of Goblin Trail in the victory display to advance. And as goblin trail is a Forest location, it is a prime target for fetching. It is by no means a trivial location – it adds 3 threat and requires you to reveal an encounter card to travel there. But when it leaves play (which requires 6 progress) you get to place those progress on the current quest (which means it can be a side quest if one of those are in play). Again, the quest does not punish you for being slow, and allows you to progress at our own pace. Keep in mind that you need not go to a Goblin trail here if you already revealed- or cleared one during Stage 1B  – then you can pick a location like the Forest Gate (described below) which actually helps you.

When you advance to 3A, you have finally managed to track down the goblins! 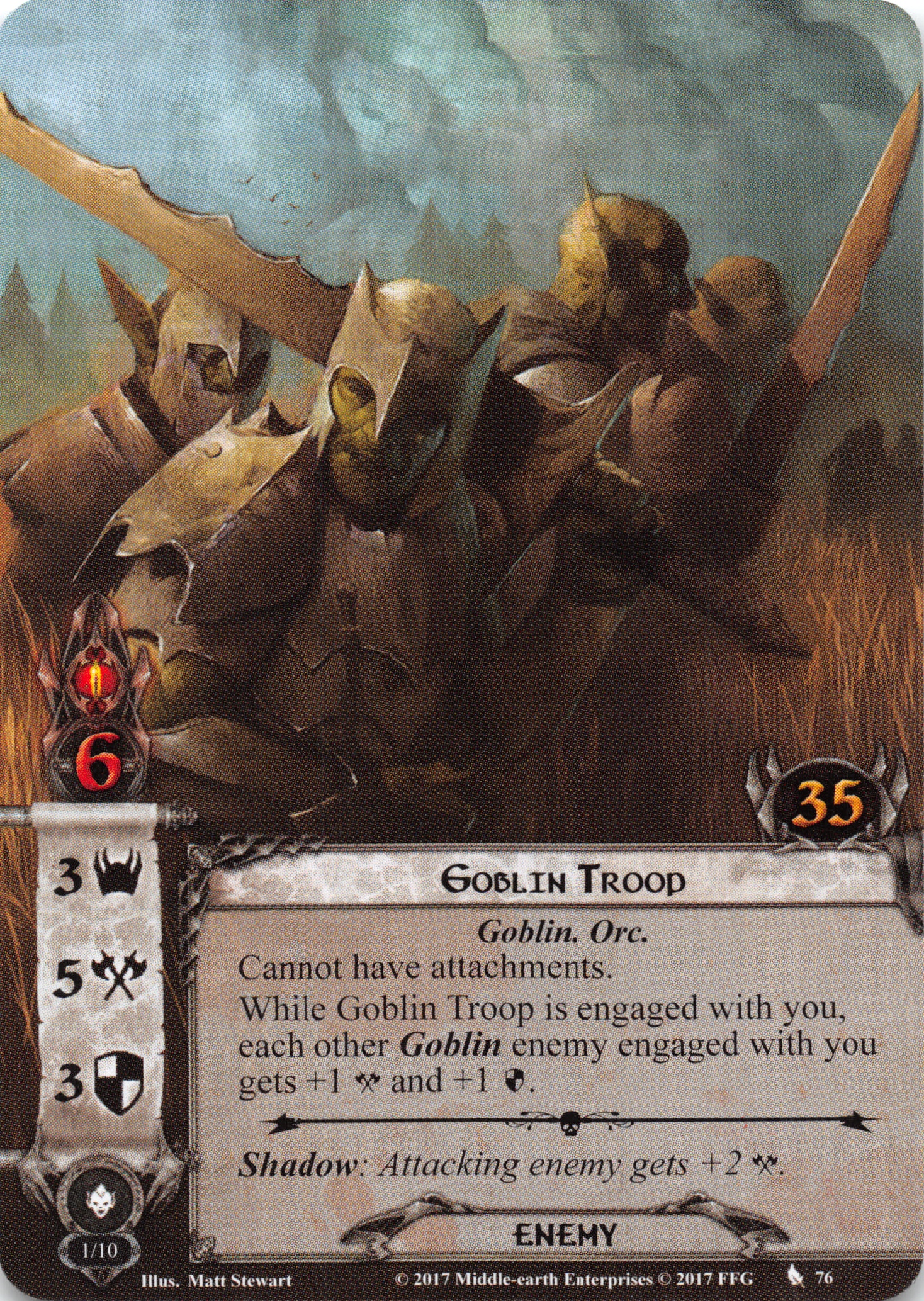 Add the goblin troop to the staging area! Each other player searches the encounter deck and discard pile for a goblin enemy and adds them to the staging area. Goblins are not revealed, so the Goblin runner does not surge, and the Goblin-town Scavengers do not force a discard (both enemies are described in more detail below). Stage 3B cannot be defeated while the goblin troop is in play. Unless you for some reason have rushed through the other stages, your board states should be ready for this. Chump block the troops if you have no one that can take a 5 attack, and be ready to throw damage on them. Usual boss fight tips apply – Feint them, boost your attackers, use a Gandalf bomb or an angry Beorn with sneak attack and bring the troop down. Once they stop kicking and you place the 6th progress you have won, and found the trail to the goblin’s secret lair!

There is a decent balance between all the different types of encounter cards in this scenario, with just a slightly larger concentration of enemies in the encounter deck.

Enemies in this quest comes in two flavours: Goblins and spiders. The goblin troop is described in detail above, so there is no need to go more into detail about them. To defeat them, use your normal combat tricks, such as Feint, Khazad Khazad, etc. to bring them down quickly. Besides the stats the troop also buffs other goblins, of which we have several in this deck. 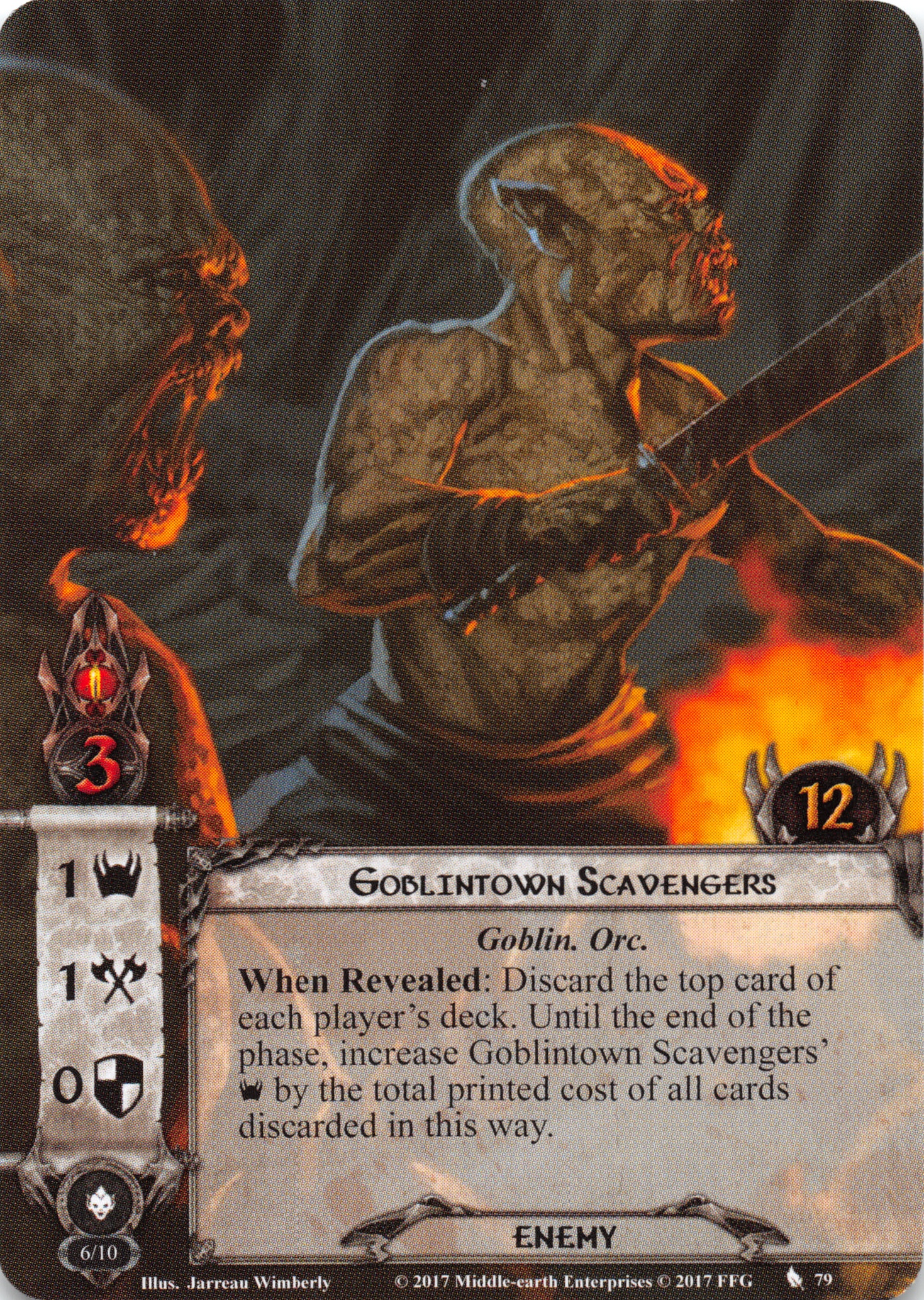 All locations in the encounter set are forests and can, therefore, be picked as viable targets during stage 2a. Having every location with the Forest trait also helps Rossiel players to get that bonus willpower sooner. 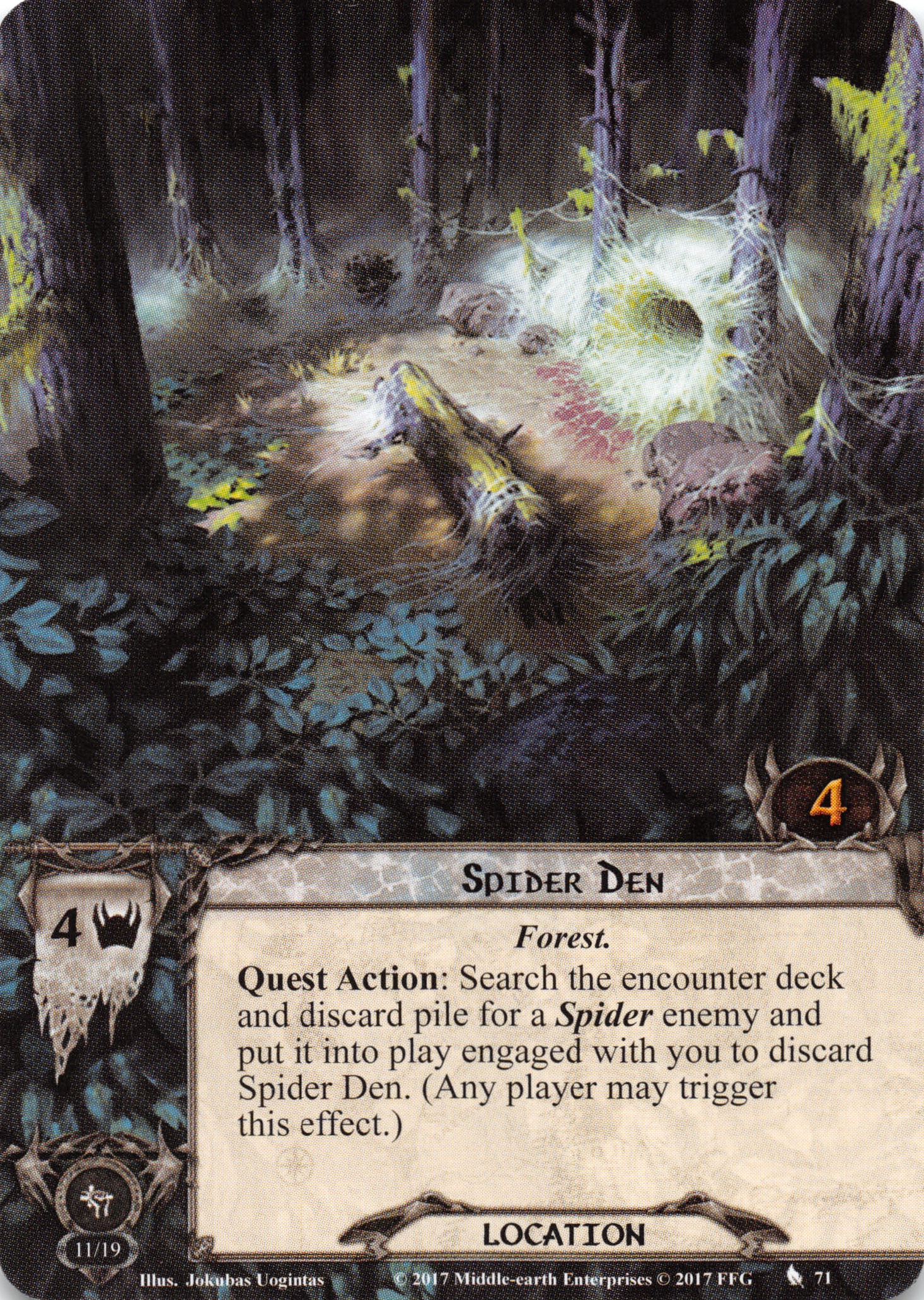 The treacheries in this quest come from a wide variety of quests in the normal quests. They range from Core Set classics to expansions as recent as Wilds of Rhovanion. There is nothing new here, but it is nice to see these old treacheries working together in one encounter deck. 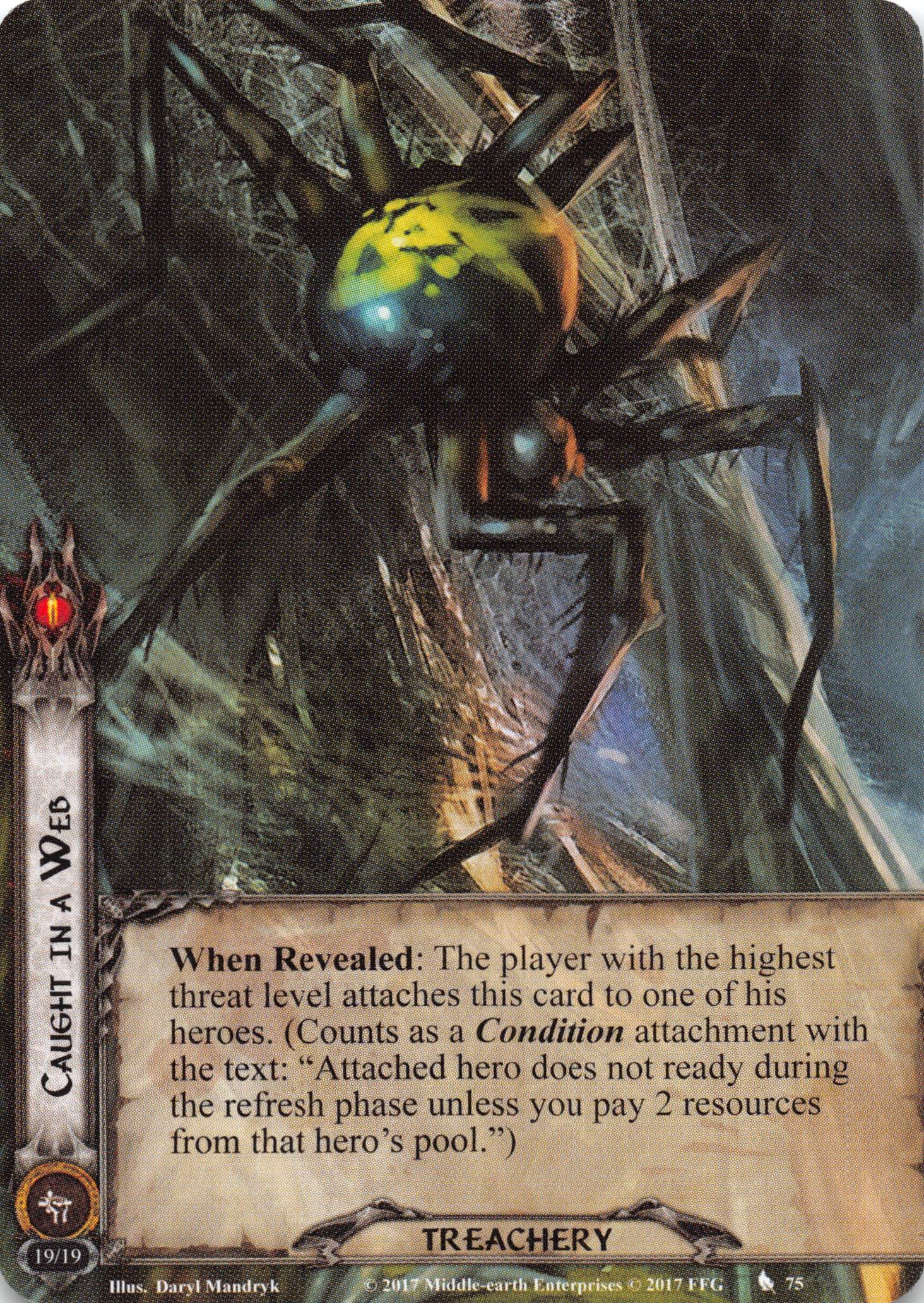 You have tracked the Goblins to their lair in the Mountains of Mirkwood. Next time, you will dive into the caves of Nibin-Dum and try to rescue the captured villagers.

6 thoughts on “The Oath”