Ah yes, the first, but definitely not the last time we get a test during our scenario’s. This first adventure into the Marshlands just north of Mordor is all about trying to capture Gollum. This quest has the tendency to be either over in a few rounds or dragging on forever as you try and find Gollum in the encounter deck, only to have him escape into the discard pile over and over again. The Escape tests will be discussed in detail later, but let us first take a look at the smelly, stinking bog that is:

At the start of the quest, players are to find the Gollum objective card in the encounter deck and add him to the staging area. Then, each player reveals a card from the top of the encounter deck and adds it to the staging area. This will result in a couple of points of threat in the staging area at the start of the game. If you are unlucky, you will have to make an escape test during setup if you reveal any of those treacheries. This can limit your questing power during the first turn, especially if every player has to make such a test. After this setup, players flip the quest card and move into stage 1B.

There is quite a lot of flavour text on this side of the card, but nothing else that changes the quest. Remember that Gollum himself will force you to take Escape tests at the end of each quest phase so it would be a good idea to leave a couple of characters ready for these tests. Characters that do not have to exhaust to quest, like from effect of Light of Valinor, Galadriel, and Lindon Navigator will be able to both quest, ánd be ready for the test. You would want to pass this stage before the resources on Gollum get out of hand. I would recommend questing hard from the moment he gets over 4 resources. Otherwise, the second stage will become more difficult and your game can last forever. The 12 quest points shouldn’t be much of a problem if you have plenty of willpower to pass the quest and the tests.

This stage will first require you to place 3 progress on it. Remember to make Escape tests at the end of the Quest phase on this stage as well! Once you make the progress (probably the following turn), the First Player may choose a player to make an Escape test. You will want to choose a player who has the most willpower left standing. Therefore, it might be a good idea to discuss beforehand who is going to do this test. That player should commit as little willpower as possible to the quest. For this Escape test, you must deal X cards off the top of the encounter deck, where X is the number of resources on Gollum. Hopefully this is around 5 or lower, otherwise, this test can prove to be difficult. If you manage to win this Escape test, you have successfully captured Gollum and are now ready to escort him back to Mirkwood.

However, it might be the case that you fail this test. In that case, the quest deck resets to stage 1B. This will drop you right back where you were at the start of the game. This has a couple of disadvantages.

The quest has quite a lot of treacheries in the encounter deck, so bringing cancellation will be a sure way to cancel over 30% of all cards in the encounter deck. The average threat is because of this quite low. There are also very few Shadow effects that will go off, so be prepared for bouncing Wargs back and forth.

Gollum is finally found and is the only objective in this scenario. He is not an ally, as he will be during later quests, so he cannot take damage or be used for any action. Gollum will force you to make Escape tests at the end of each quest phase. You will have to deal 1 card per player for this test. However, the entire party may commit characters to this test, which makes it easier. If you fail the test, you are forced to put 2 resources on Gollum. Between this effect and a couple of treacheries and locations, resources tend to pile up on Gollum. If he ever has 8 or more resources on him, you will be forced to shuffle him into the encounter deck. You will now have to find him again. If he happens to be revealed during staging, he loses all his resources. This makes the second stage of the scenario very easy. 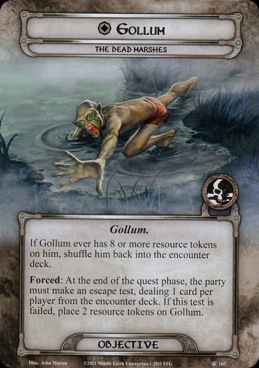 While there is only 1 new enemy included in the Dead Marshes expansion, there are plenty of nasty enemies to make your life difficult. The Hill Trolls are back, and if you reveal them during staging, you really have to watch out that your threat stays manageable. The Marsh Adder feels right at home in this quest, but can be a real pain for the unprepared. Drawing any of these enemies during setup or when your board is unprepared can be dangerous. Wargs can also provide you with problems. The number of shadow effects in this deck is quite low, so it may take a while before you can kill them.

The scenario has got a couple of locations which will stretch the game out longer than it should. This is done by having a crazy amount of quest points on them. A good example of this is The East Bight. These locations will also make the tests harder and will provide Gollum with more resource tokens.

The new treacheries all revolve around making more Escape tests. This can be troublesome as you will struggle to pass at least 2 tests and make some progress on the quest. The other treacheries put resources on Gollum, so be prepared to cancel some of those. The regular treacheries will punish players harder if they have a threat of 35 or higher, keeping your threat below this is advisable.

This quest introduces the players to the many tests that are in this game. The Escape Test in the Dead Marshes is meant to represent Gollums attempts to escape capture. The test will take place at the end of the questing phase if Gollum is in play. You can also be forced to make an escape test because of a treachery card that got revealed during staging. In order to perform an Escape test, players must first commit characters who are using their willpower for this test (or attack power with Through the Mist). For Gollum‘s effect, every player may commit characters to the test. But there are some tests where only the first player may commit characters. Be sure to leave some characters ready if you are the first player. Even if you are not the first player, you must still have at least some characters ready in case Lights of the Dead get revealed, forcing every player to make a test.

Then, players are instructed to discard a number of cards from the top of the encounter deck. For Gollum, this is equal to the number of players in the game. Players then compare the commited willpower to the Escape value on the revealed cards. Not all cards have this keyword, so they are considered to be Escape: 0. This can get boosted with The Heart of the Marshes. When comparing the values, if the players have committed more willpower than the Escape Value, they pass the test and nothing happens. If they manage to get willpower lower or equal to the Escape Value, they fail the test. Each card that forces you to make a quest has an effect that resolves if this happens. Usually, this means that you must place resources on Gollum, and in some cases raise your threat.

Try not to commit everyone to these tests, unless it is the final one. If you happen to reveal a treachery during staging which forces you to make a test, do not send every character you have. You will have to make another test at the end of the quest phase as well.

Characters that work well with these sort of tests are: Galadriel (both her effect and her high base willpower), Cirdan the Shipwright (high base willpower), Spirit Eowyn (you are able to increase her willpower accordingly), Lindon Navigator (can quest and test), Rider of Rohan if there is a side quest in the Victory Display (can quest and test). Also, consider using ally Faramir to boost your characters for both the quest and the test. Readying effects like Light of Valinor and Unexpected Courage are good attachments to have in case you need to do multiple tests.

This leaves just 1 more quest in this cycle to be discussed, Return to Mirkwood. This one will probably take a while to make, so look for it next weekend. Attercop! Attercop!

6 thoughts on “The Dead Marshes”