The latest line of Middle Earth video games, the Shadow of Mordor series, featured this legendary Elven smith. But now it is time for our heroes to search the ruins of his city for a ring mould. This quest is one of the more enjoyable quests of this cycle to me and features a nice mechanic that tries to rush you to clear locations before the Orcs do. The quest isn’t too difficult if you stay on top of it, but the theme is enjoyable and fits nicely with the story. So this article will take place in Ost-in-Edhil, the city of the Elves, as our heroes try to uncover:

To start off this quest, the players are instructed to fill the staging area with encounter cards. The Orc’s Search objective is added without any attachments to it and will serve as the destination of any location that is damaged beyond its quest points. Bellach is also added to the staging area contributing his X threat (which is 0 at the start of the game) and his Scour effect to the staging area. His scour effect will remain in play for the majority of the game, so players will likely have to trigger it at least once. The Secret Chamber location is also added to the staging area and will be guarding the Celebrimbor’s Mould objective. The location has the text that if it is ever placed underneath the Orc’s Search, the players immediately lose the game. The location has 6 quest points so the players will have some time to explore the location before it gets critical.

With all of these cards added to the staging area, the players are likely to start the game with around 3X (where X is the number of players in the game) worth of threat in the staging area before staging. This will be difficult to overcome and will dictate the first few rounds of the game. As long as you aren’t placing cards underneath the Orc’s Search, Bellach won’t become a problem threat wise.

And so begins the first round of the game. On the flip side of quest card, 1 is not a whole lot to keep track off. Bellach is immune to player card effects and will be unable to be engaged or leave the staging area by any other means. Note that you can technically play attachments on him, the attachments won’t do anything, so there is no point. This means that Bellach will be able to be ignored for engagement checks. Do remember that Bellach is still contributing threat to the staging area and has a Scour effect that must be triggered whenever the players are instructed to. Bellach starts off with 0 threat, as there won’t be cards underneath the Orc’s Search from the start, but he will gradually become more threatening as the game progresses.

The Time 3 keyword on this quest is actually quite mild if players can keep their board state clean enough during the first stage. Once all time counters have been discarded, the players must trigger each Scour effect currently in play (on enemies and locations) and then place 3 new Time counters on the stage. The Scour effects are noted on some cards with the bold SCOUR keyword and do not trigger unless instructed to by encounter card effects or the quest card. These effects are quite negative and can accelerate the rate at which the Orcs are digging through Ost-in-Edhil. Try to prioritise killing enemies or clearing locations with these Scour effects before you remove the final time counter. This saves a lot of pain in the next round. The only Scour effect that you can’t get rid off is the one on Bellach. 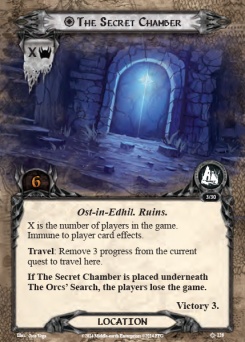 The main course of action during this phase is to place more than 3 progress tokens on any quest card during the first or second turn. This allows players to travel to The Secret Chamber and eventually claim the Mould. The reason why you want to travel here as soon as you can is that the players lose the game if the Secret Chamber is ever placed underneath the Orc’s Search. This means that the location cannot take more than 6 damage. In order to prevent this from happening, travelling to the Secret Chamber as soon as possible and clearing it on the next turn will be vital. There will be some encounter cards that may damage the Secret Chamber while it is active, but if you manage to clear it in one round, it is unlikely you will get to 6 damage on the location. Once the Secret Chamber has been explored, the players are allowed to claim Celebrimbor’s Mould. There aren’t too many restrictions to this artifact, as it is not restricted and will not leave the player’s control when the attached hero takes damage. That said, I will recommend you putting this mould on a character who is likely to survive. Folco and Caldara make for very poor choices here, as the players will lose the game if the mould is attached to a hero that leaves play. Your best bet will be to place the mould on your questing or attacking hero.

Once players have claimed the mould, they are clear to proceed to stage 2 once they have the 14 required progress on the stage. Note that the transition will trigger Scour effects so I will advise you to clear as many enemies and locations with such a trigger before you progress.

This is where you will start to confront Bellach after he has discovered you and claimed the Mould for himself. To start off, the moment you advance to this stage, you will have to trigger each Scour effect in play. It is, therefore, a good idea to minimize the number of these in play before you advance the stage. You won’t be able to avoid the Scour effect on Bellach so a lot more enemies will start to pop up from the encounter deck. Then, Bellach will make an immediate attack against the player who controls the mould. If the players have discussed this beforehand, the controlling player shouldn’t have a problem defending his 5 attack power. Otherwise, the players might be able to use a Sentinel defender for this attack. Remember that a lot of enemies an come down this same round, so having plenty of defending options or cancellation would be a great asset at this point in the game. After the attack, Bellach stays in the staging area and receives Celebrimbor’s Mould from the hero that had it attached. The objective of this stage is to reclaim the mould!

The Time counter on this stage is the same as the first stage. After all 3 time counters have been removed, all Scour effects in play are triggered. This results in more enemies, more damage on the locations, and perhaps putting more cards underneath the Orc’s Search. It will be crucial to the players that they try to minimize the number of cards underneath there. That gives more time that they can take to complete this stage.

This stage will need a couple of requirements to be met in order to complete it. First of all, the players must have at least 12 progress tokens on the main stage. This allows the players to engage Bellach who also loses his immunity. Then, the players must be able to kill Bellach. With a combined defence and hitpoints of 11, it doesn’t take too much to kill him. A couple of dedicated attackers with some ranged support can take care of him. Once Bellach is destroyed, the players can claim the mould and win the game (provided they also still have 12 progress on the main stage). After the players win the game, they can leave the Orcs behind and move back south through Dunland. There they will find themselves amidst a civil war between the three clans. The Antlered Crown will be the next and final AP of this cycle.

These statistics do not count the Mould, Secret Chamber, Bellach or the Orc’s Search, as those are removed from the encounter deck during setup. There is a fair balance between enemies and locations, so decks should be capable of handling both. Lanwyn can be a great hero to bring to this quest, as she is likely to ready thanks to 31% of Normal encounter cards have the potential to surge. 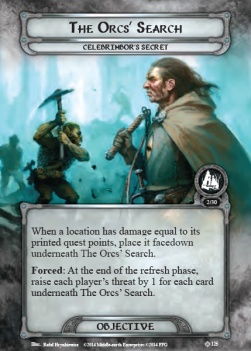 Bellach and his Orcs managed to outpace you while you were stuck in the Swanfleet. They are also trying to find the mould and will destroy the city brick by brick until they find it. The encounter deck brings 2 new enemies with it, each with a Scour effect. 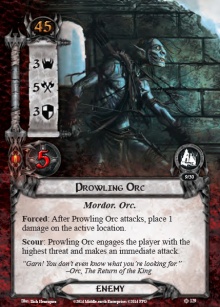 This quest is all about locations and clearing these before the Orcs do. Besides the locations I cover below, you can also draw into Broken Lands. This location has top priority to travel to, as it shuts down any effects that put progress on locations in the staging area. 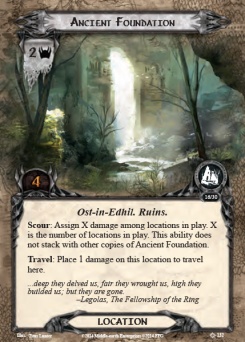 The treacheries in this encounter deck tend to focus on damaging locations and triggering off of the Orc’s Search. All treacheries can be cancelled, and there are cases for all of them where you definitely should cancel them. A lot of treacheries also tend to surge, so Lanwyn can really get her share of readying in this quest. 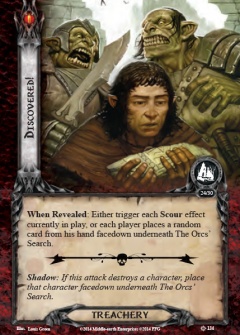 And so ends the final quest of this cycle that I would deem easy or enjoyable. The rest of them will be more tedious, but I’ll get around to doing them next. I will start with the Antlered Crown, gonna take some time (get it, TIME, because that quest has a lot of it) 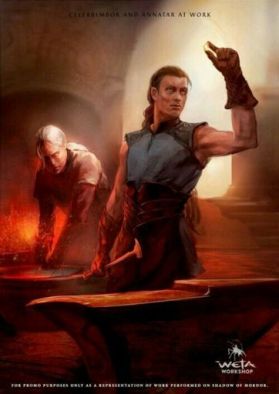 One thought on “Celebrimbor’s Secret”