Skip to content
durinsfather Nightmare, Passage Through Mirkwood, Shadows of Mirkwood 18 August 201818 May 2021

Oh yes, it is time to dip our toe into the nightmare scenarios. And what better place to start our misery than the very first (and easiest) scenario in the game: Passage through Mirkwood. The developers used this quest in its Normal mode to introduce players to the game and to have a relatively easy quest to lure people into a false sense of security when it comes to the difficulty of this game. In Nightmare mode, the developers are adding in new cards that require you to exhaust characters and reacting of characters being exhausted or not. It is still a relatively easy quest when compared to other Nightmare scenarios, but at least it has some challenge to it. Also, give this article from Darkling Door a read on how to best prepare yourself for the scenario, including some decklists that work against the scenario.

There are no new passive rules in the Nightmare version. The only new text that is included on the Nightmare card is that during setup, the players will have to reveal a card per player and add it to the staging area. This only takes effect at the beginning of the game, so players can disregard this rulesheet afterwards. This effect makes the start of the game a bit more difficult, as there is a lot more threat in the staging area, and the players might have to engage more enemies from the get-go.

The basic setup for these Nightmare scenarios follow the rules on the new rulesheet. It requires removing some specific cards from the normal encounter deck and replacing them with the new Nightmare cards that were in the pack. This sets up the new scenario. Players will have to resolve this set up before the setup text on quest card 1A, though the order rarely matters.

The quest doesn’t change much between this version and the original Normal version. The objective remains the same, and the game starts very much in the same way. The first big difference is during set up. Each player is instructed to reveal an encounter card after the Old Forest Road and the Forest Spider have been added to the staging area. Besides the normal cards of this scenario, players can now also start revealing Nightmare cards that will make the scenario very tricky from the start. Glade of the Spawn and Forest Flies will add a lot of threat to the staging area, the Spider’s Web will hurt a hero right out of the gate, and the new Ungoliant’s Spawn will be tough to take down in the first rounds. 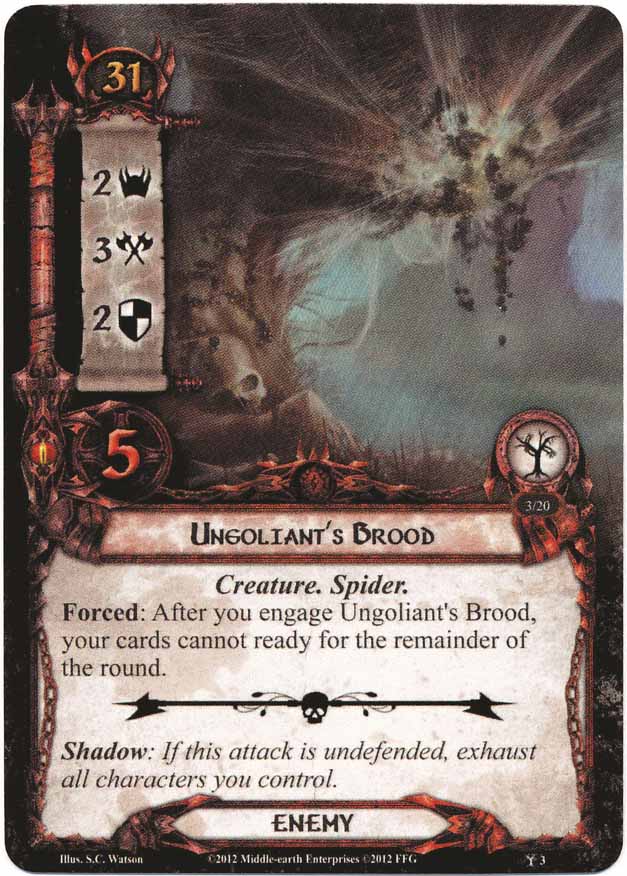 There are some good cards to reveal at this part of set up though, Ungoliant’s Spawn won’t actually trigger her When Revealed effect, making it easier on your questing characters. Backtrack! will also not do anything except surge. It is good to get that treachery out of the encounter deck early, as it could recycle Ungoliant’s Spawn later. Necromancer’s Reach is likely one of the best reveals, as it doesn’t trigger anything, doesn’t surge, and won’t be damaging your exhausted characters later in the game. Driven by Shadow is also an easy treachery, it will only boost the cards already in the staging area until the start of the planning phase, making it only last when you are not questing.

After this setup, the players will have accumulated a fair bit of threat in the staging area, meaning that they will have to quest hard during the first few turns. Remember that the first player can send an additional hero to the quest if you are planning on travelling to the Old Forest Road that turn.

The rest of the quest is much the same as the regular scenario, only with tougher enemies and nastier locations. The new encounter cards feed off exhausted characters, so having readying abilities on heroes and allies will save you from having tougher enemies or having to damage other characters. 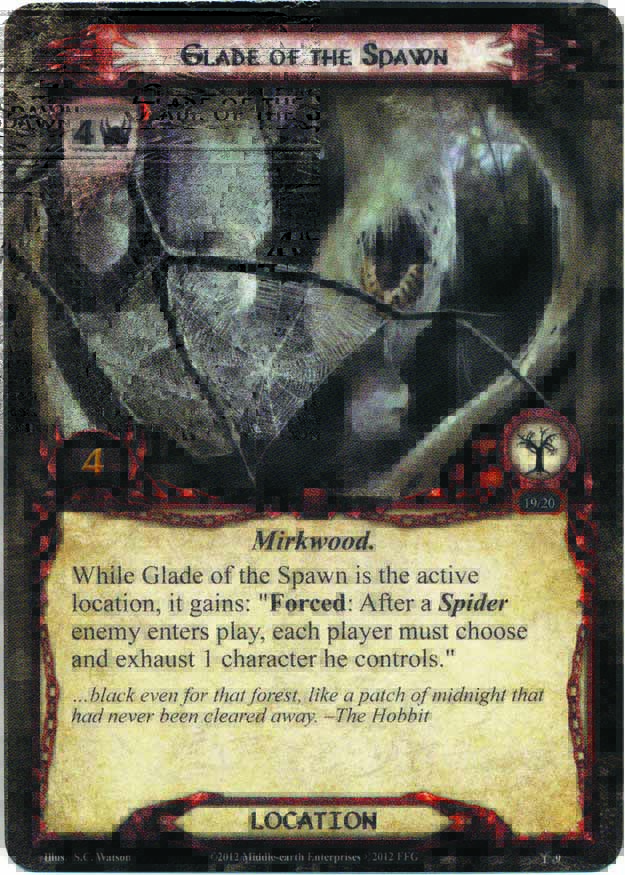 The different stages 3 are also still the same, though having Beorn’s Path in play might be even luckier than in normal mode. If you go to “Don’t Leave the Path” (which you have left a while ago) you will have to find the new Ungoliant’s Spawn and kill her. Since the quest stage adds the enemies instead of revealing them, the effect on Ungoliant’s Spawn is negated. Since stage 2 only requires 2 progress tokens, you could clear it in the combat phase after you advanced to it in the questing phase. This will keep the Ungoliant’s Spawn in the staging area for the next turn but allows players to bypass the nasty When Revealed effect on her.

The same winning conditions apply to the quest as with the original quest. Players must either defeat Ungoliant’s Spawn at “Don’t Leave the Path” or they must make 10 progress on Beorn’s Path and not have Ungoliant’s Spawn in play. This shouldn’t be too difficult, as players will likely have a lot of experience with this quest. If the players defeat the last stage, they win the game and have defeated their first Nightmare scenario. Now the rat-infested waters of the Anduin await them in the Nightmare version of the classic Journey Along the Anduin.

These stats do not count the Old Forest Road and the Forest Spider that start in the staging area. It is unlikely that these cards find their way back into the encounter deck. Comparing the pie chart to the Normal mode, there are more treacheries in this scenario, at the cost of locations. The rest of the stats are as expected, higher than Normal mode. It is a Nightmare version for a reason of course.

The enemies in the Normal mode weren’t too difficult, so the nightmare version replaced some of them with tougher enemies. It also focuses more on the creatures and insects of the forest, rather than the Orcs. 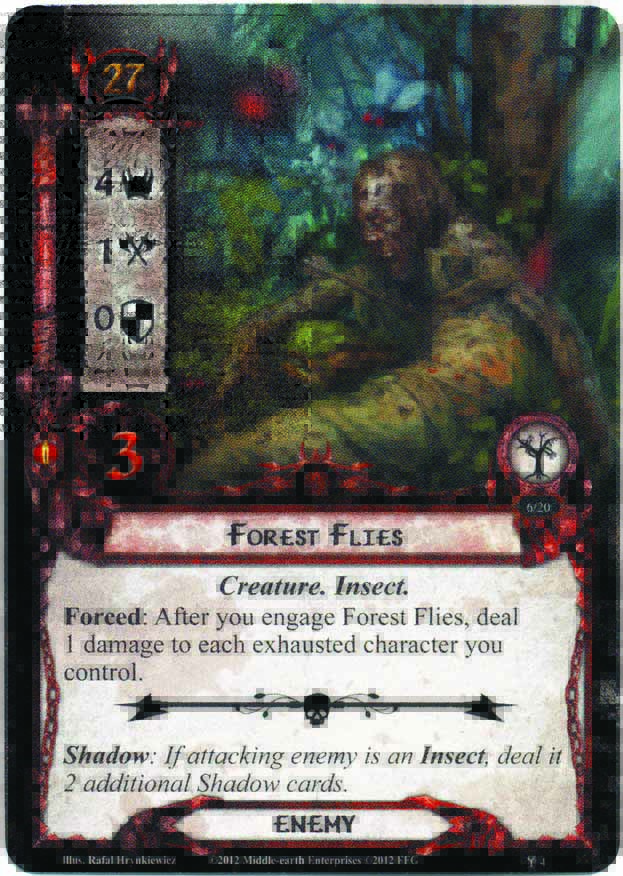 There are two terrible new locations in the Nightmare version, but they have the Mirkwood trait, rather than the Forest trait, like the Normal cards. This prevents synergy with cards like Cloak of Lorien or Woodland Courier. An easy change to miss, but it can have big effects for specific decks. 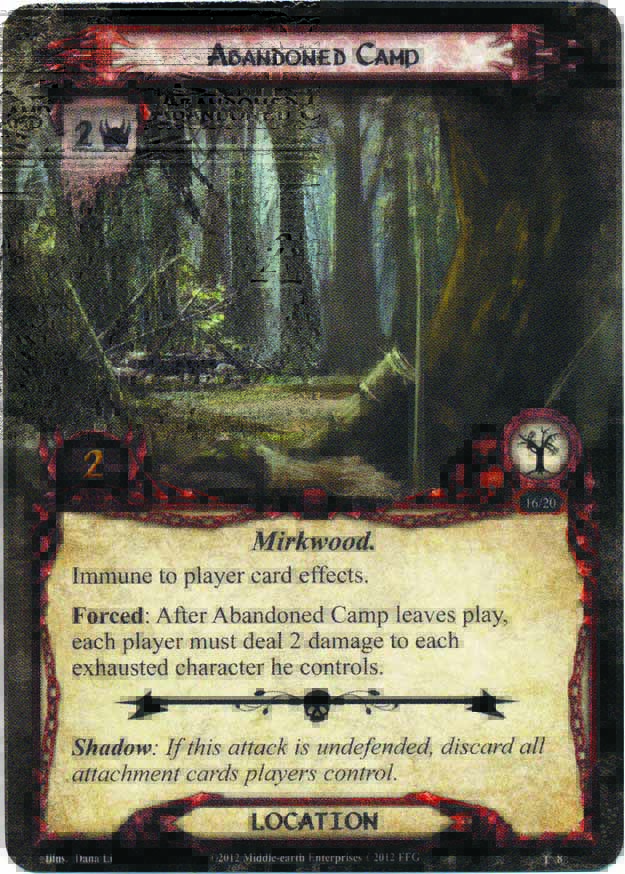 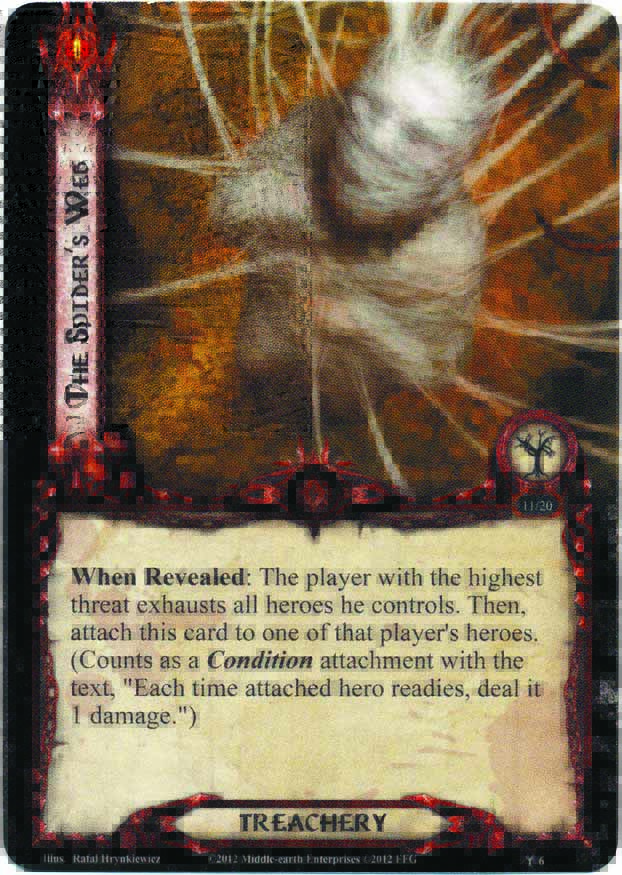 Since this is the first and probably the easiest Nightmare scenario, there are plenty of playthroughs to watch:

And that’s it, the first of (hopefully) many Nightmare analyses on the blog. I am currently in the process of collecting Nightmare packs so I won’t be doing these in order. I am only going to make articles on Nightmare packs I own, to have a better feeling of the quest. I will invite anyone interested to make a Nightmare article themselves. You already have the basis of the quest and now also a template to use for your article. I might do another Nightmare analysis of The Hunt for Gollum (as I own that one as well), though I will first start with the Angmar Awakened cycle with the very first quest: Intruders in Chetwood.

4 thoughts on “Nightmare Passage through Mirkwood”